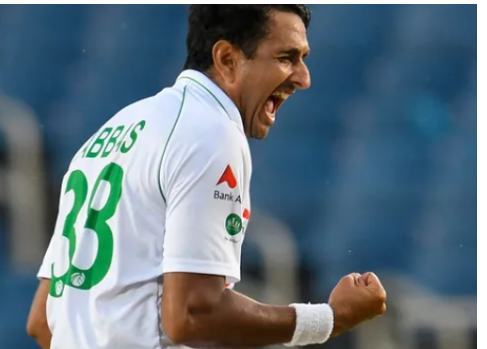 Taking Pakistan’s final five wickets for just 31 runs, the West Indies looked to have taken control, only for a Mohammad Abbas double strike to spoil their day in Jamaica.

Losing Kieran Powell and Nkrumah Bonner to Abbas before the light was called, the hosts finished the day reeling at 2-2 and will look to rebuild through skipper Kraigg Brathwaite and Roston Chase in reply to Pakistan’s 217.

Beginning their World Test Championship campaign at Sabina Park, home skipper Brathwaite won the toss and elected to bowl on a greenish surface, and his new-ball pair of Kemar Roach and Jayden Seales both made the most of the conditions, claiming an early wicket each.

Roach found the gap between Imran Butt’s bat and pad, cleaning him up for 11, with Abid Ali edging a full Seales delivery to wicketkeeper Joshua da Silva for 9.

As rain interrupted the first session of play, Pakistan fought to 68-2 after lunch, only for Seales and Roach to strike again in successive overs. Seales in particular extracted life out of the surface, finding the shoulder of Azhar Ali’s bat to dismiss him for 17, while Roach’s fuller length undid Babar Azam, edging to Da Silva for 30.

In response to the double blow Fawad Alam and Mohammad Rizwan picked up the pieces, ticking the score over three figures, though the partnership of 33 ended abruptly with a lapse in concentration by the Pakistan gloveman. Looking in relative control and scoring his 23 from 30 deliveries, he failed to keep a flick off his pads along the ground, finding Roston Chase at square leg off the bowling of Jason Holder.

Alam dug in despite partners falling at the other end, including Faheem Ashraf (44) who was run out by Chase to break a partnership of 85. Losing Yasir Shah for a duck and Hasan Ali for 14, Alam was undone by Jason Holder, edging onto his stumps for 56. Holder claimed the final wicket of Mohammad Abbas in a successful cleanup of the tail, seemingly swinging the match in the hosts’ favour.

It was Abbas’ new-ball nous that stole the show as the light waned however, with the swing bowler not conceding a run across his two overs and claiming the West Indian pair in successive deliveries. Finding Powell’s outside edge and the grateful hands of Imran Butt diving forwards, Abbas then wrapped the pads of Bonner, who was adjudged lbw.

Pakistan turned to spin as umpires Gregory Brathwaite and Joel Wilson looked to the horizons, with Yasir Shah finding Brathwaite’s outside edge in the last over of play. The ball fell short of first slip, with Brathwaite adding a single to the score four balls before stumps was called.

US, UK to launch evacuation flights as Taliban advance