ISLAMABAD: Abdulaziz Hamad Aljomaih, MD Investments at Aljomaih Holdings, one of the largest business groups in Saudi Arabia, expressed the hope that the Government of Pakistan would expedite the removal of any impediments to the conclusion of Shanghai Electric Power’s (SEP) proposal to take a 66.4% controlling stake in K-Electric Limited.

Aljomaih is one of the largest investors in KE through the consortium that bought out KESC in 2005.

During his two-day visit to Pakistan he met the country’s senior leadership and officials including Prime Minister Imran Khan and President Arif Alvi, according to a press release.

Hamad Aljomaih was in Pakistan to seek resolution of challenges facing K-Electric including the long-standing issue of payables and receivables involving KE and several government entities.

Aljomaih expressed pleasure that the Government of Pakistan has assured that it will extend support in expediting the process of approvals so that held up Tariff Differential Claims to the tune of around PKR 275 billion on principle basis, are released at the earliest, which would be in the absolute interest of further improving the city’s demand and supply situation, as well as improving the reliability and resilience of the transmission and distribution system.

These issues have put a strain on the sustainability of the company, that has already done so much for the improvement of Karachi’s energy security, which has been greatly beneficial for the industrial growth of not just the city but also the country. Since its privatization the Group has invested more than USD 720 million as equity into the Company, which is still the single largest Foreign Direct Investment in Pakistan. This investment has allowed the Company to invest more than USD 3.3 billion in Karachi’s power infrastructure.

The Saudi businessman who has significant interest in several industrial and financial sectors internationally, is also Chairman of the Arcapita Investments Bahrain, which had previously completed over 80 investments over the last 20 years with a total transaction value exceeding $30 billion in the United States, Europe, the Middle East and Asia. Established in 1936, Aljomaih Holding Company is a major industrial and commercial conglomerate having partnerships with some of the most prominent global companies including General Motors, Pepsi Cola, Shell, Yokohama, and many other American, European and Japanese international brands.

Abdulaziz Hamad Aljomaih’s relationship with K-Electric goes back 15 years. He was main driver of the privatization process of the company and also served as the first Chairman of the Board of Directors when the power utility was privatized. He continues to serve on the board of KES Power, the company that holds a controlling stake in KE.

Aljomaih was on a two-day visit to Pakistan where he held meetings with Prime Minister Imran Khan as well as President Dr Arif Alvi. Separate meetings were also held with Dr Abdul Hafeez Shaikh, the Finance Minister of Pakistan, Mohammedmian Soomro, the Federal Minister for Privatization, Omar Ayub Khan, the Federal Minister for Energy and Nadeem Babar, Special Advisor to the PM on Energy, focusing on areas of mutual interest, such as the resolution of pending issues, as well as potential future collaborations.

During his meetings with the Pakistani leadership, Aljomaih said that a strategic investor with utility expertise would leverage its strengths to bring further advancements, benefiting the consumers and economy at large. 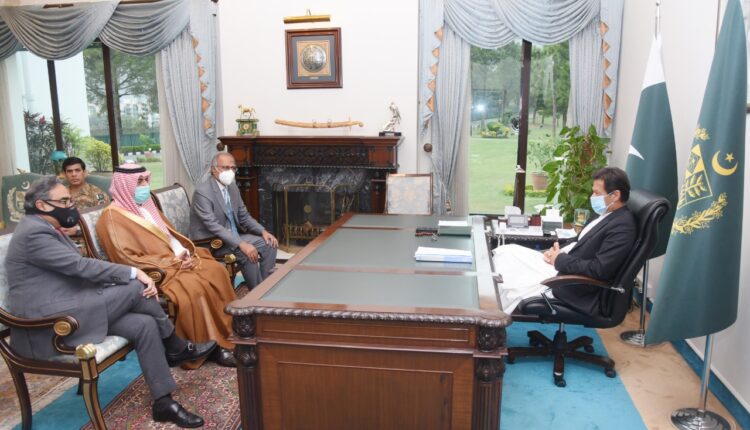 He said, “K-Electric has been transformed into a utility that is attracting investors like Shanghai Electric, one of the major players in the global energy sector that has transformed the city of Shanghai from 3000MW to 30,000MW. This would have not been possible ten or fifteen years ago. However, this is possible today when KE has been transformed into a top of the line integrated utility company of Pakistan. The transaction that has been lingering since 2016, when completed will open the doors to investment of billions of dollars into Karachi’s energy infrastructure.” Aljomaih also reiterated the power utility’s unwavering commitment to its vision of providing safe and reliable power to its customers.

Abdulaziz Hamad Aljomaih welcomed the Government of Pakistan’s positive response with regards to resolution of the long-standing issue of payables and receivables with various government entities, which is also a deterrent to the conclusion of the sale of Aljomaih’s stake to Shanghai Electric Power (SEP).

On the second day of his visit, Abdulaziz Hamad Aljomaih met with key stakeholders in Sindh including Governor Sindh Imran Ismail, Provincial Minister for Energy Imtiaz Shaikh, Murtaza Wahab Adviser to Chief Minister of Sindh on Law, Anti-Corruption Establishment, and Information, among others. Matters regarding KE, which is one of Aljomaih Group’s largest investments outside of Saudi Arabia also came up for discussion.

The talks also focused on KE’s continued commitment to Karachi, and its upcoming 900 MW power plant located at Bin Qasim. Abdulaziz Hamad Aljomaih expressed the hope that release of pending payments would enable the power utility to continue investing into Karachi’s power infrastructure, and also remove hindrances to the signing of fresh agreements that were critical to improving the city’s demand and supply situation.