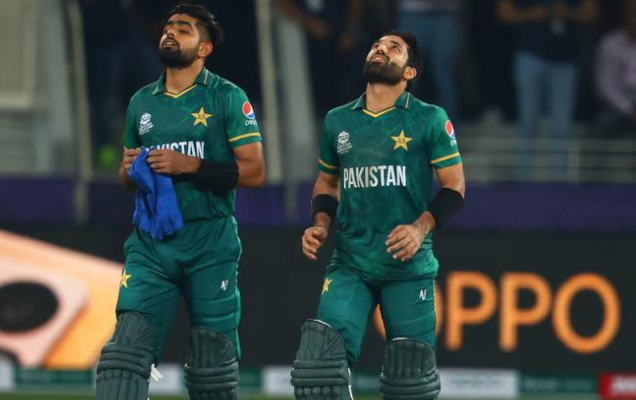 Pakistan’s Babar Azam and Mohammad Rizwan, the most destructive opening pair at the T20 World Cup, have been described as “unique” by batting coach Matthew Hayden.

The Australian legend should know – over a 15-year international career, left-hander Hayden was a fixture at the top of the order, compiling more than 8 000 test runs and over 6 000 in ODIs.

“Babar and Rizwan have created a unique opening for themselves,” Hayden told AFP at the T20 World Cup where Pakistan have already made the semifinals with four wins in four games.

“They are very independent players with their own styles but that blend and mix make for the perfect combination.

“They are unique and it’s special to watch the way they have gone about playing in this World Cup. They chased down a target against India for victory in a perfect run chase, none down for a victory that Pakistan will remember.”

In 2021, skipper Babar and wicketkeeper-batsman Rizwan have amassed 826 runs in 14 Twenty20 international partnerships.

They put on an unbroken 152-run stand – their third as an opening pair – as Pakistan trounced India in Dubai by 10 wickets – their first win over their arch-rivals in 13 World Cup matches.

They combined once more for a 113-run stand to anchor Pakistan’s win over Namibia in Abu Dhabi, becoming the first team to reach the semifinals after four wins in as many games.

“We support each other and although we are not power hitters, we have a good record,” Rizwan said after his man-of-the-match 79 not out against Namibia.

“If I get out early, he is needed to anchor the innings; if he falls, I am given the task to carry on.”

Babar has three half centuries at the World Cup and his only failure came against New Zealand when he was dismissed for just nine.

With his run spree – 721 in 21 matches this year – Babar has regained the No 1 spot in the Twenty20 batsmen rankings.

Rizwan has 951 runs this year in the same number of matches.

His average is an astonishing 95.10. Rizwan is now No 4 in rankings.

“His commitment and belief is exemplary and I enjoy his company at the crease.”

Ever since they were asked to open a Twenty20 innings in February, they have made the spots their own.

As partners, they have shared four century stands and one partnership of fifty.

They both, however, differ in demeanour.

Babar appears the more serious, fitting for the under-pressure status as national captain.

Rizwan is chirpy, even sometimes smiling ruefully on his way back to the pavilion after being dismissed.

While Babar was an early starter in the team, Rizwan had to bide his time.

Babar got support at home while Rizwan’s conservative family did not want him to play cricket.

Babar made his mark in two Under-19 World Cup editions in 2010 and 2012 – captaining Pakistan in the second.

Rizwan had a real struggle to get picked, waiting five years for his chance after establishing himself as a first class cricketer of repute.

Once he replaced wicketkeeper Sarfaraz Ahmed in late 2019 he has made the spot his own, shining in all three formats with his best form coming in Twenty20 cricket.

Now both Babar and Rizwan are the heart and soul of the Pakistan team as they target a second T20 World Cup title.