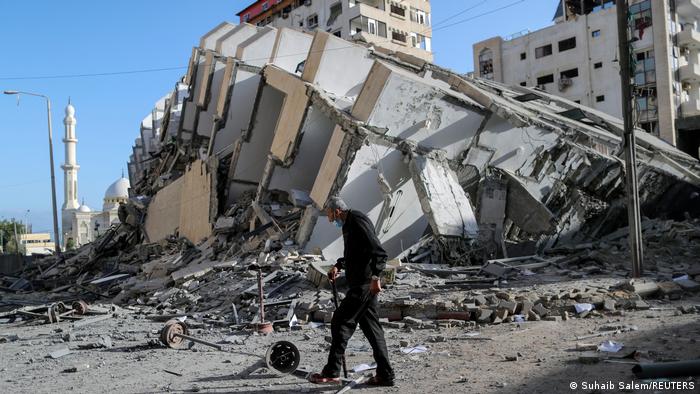 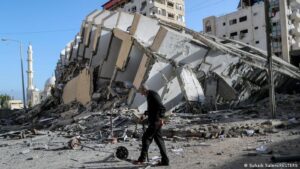 (Reuters) – A senior Hamas official predicted a ceasefire within days in the Israel-Gaza conflict, after U.S. President Joe Biden urged Israeli Prime Minister Benjamin Netanyahu to seek a “de-escalation” in the fighting.

Rocket fire into Israel died down overnight, a lull that stretched into Thursday morning. Israel was launching new airstrikes in Gaza after daybreak, but, Israeli media said, at a slower pace than in past days.

An Egyptian security source said the sides had agreed in principle to a ceasefire after help from mediators but details were still being negotiated in secret.

“I think that the ongoing efforts regarding the ceasefire will succeed,” the Hamas political official, Moussa Abu Marzouk, told Lebanon’s al-Mayadeen TV. “I expect a ceasefire to be reached within a day or two, and the ceasefire will be on the basis of mutual agreement.”

Asked on Israel’s Kan public radio if a ceasefire would begin on Friday, Intelligence Minister Eli Cohen said: “No. We are definitely seeing very significant international pressure … we will finish the operation when we decide we have attained our goals.”

Netanyahu, who spoke to Biden by telephone on Wednesday, has said Israel wants to achieve “forceful deterrence” to dissuade Gaza’s ruling Hamas Islamists from future confrontation.

Israel carried out over a dozen airstrikes on Gaza after midnight, targeting what it said was a weapons storage unit in the Gaza City home of a Hamas official, and military infrastructure in the homes of other commanders from the group. Medics said four people were wounded in one attack on the town of Khan Younis in southern Gaza.

Rocket sirens blared just after midnight in the southern Israeli town of Beersheba and in areas bordering Gaza, with no reports of casualties or damage. The workday began on Thursday with no alerts.

Since the fighting began on May 10, Palestinian health officials say 228 people have been killed in aerial bombardments that have worsened Gaza’s already dire humanitarian situation.

Israeli authorities put the death toll to date at 12 in Israel, where repeated rocket attacks have caused panic and sent people rushing into shelters.

Netanyahu has repeatedly hailed what he has described as support from the United States, Israel’s main ally, for a right to self-defense in battling attacks from Gaza, home to 2 million Palestinians.

But Biden put the Israeli leader on notice in a telephone call that it was time to lower the intensity of the conflict.

“The president conveyed to the prime minister that he expected a significant de-escalation today on the path to a ceasefire,” White House spokeswoman Karine Jean-Pierre told reporters on Wednesday.

Washington and several Middle East capitals have sought an end to the violence through diplomacy. The 193-member United Nations General Assembly was due to meet on the conflict on Thursday with the participation of several foreign ministers but it was not expected to take action.

The U.S. mission said it would not support a French push for a resolution in the 15-member U.N. Security Council, saying it believed such actions would “undermine efforts to de-escalate” violence.

Hamas began firing rockets on May 10 in retaliation for what it called Israeli rights abuses against Palestinians in Jerusalem during the Muslim holy month of Ramadan.

The rocket attacks followed Israeli police clashes with worshippers at al-Aqsa Mosque in Jerusalem and a court case by Israeli settlers to evict Palestinians from a neighborhood in Israeli-annexed East Jerusalem.

The hostilities are the most serious between Hamas and Israel in years, and, in a departure from previous Gaza conflicts, have helped fuel street violence in Israeli cities between Jews and Arabs.

The conflict has also spilled over to the Israel-Lebanon frontier and stoked violence in the occupied West Bank.

Four rockets were launched towards Israel from Lebanon on Wednesday, the third such incident since the Gaza conflict began, the military said. There was no claim of responsibility.

Biden to ‘soon’ speak on Taliban takeover of Afghanistan