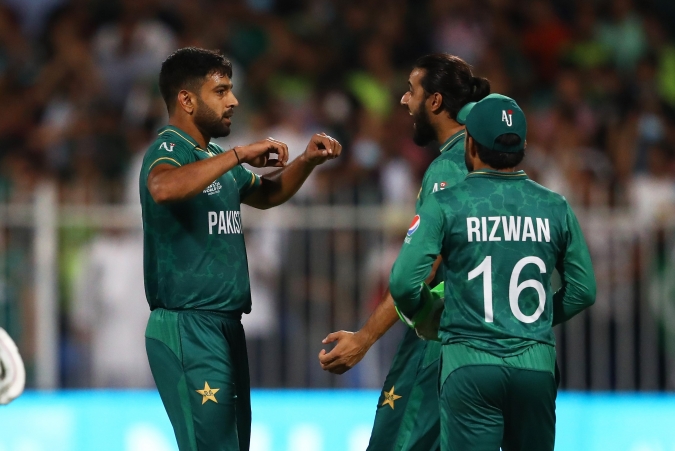 Harif Rauf took a career-best four for 22 and Shoaib Malik and Asif Ali added 48 runs for the unbroken sixth wicket from 23 balls to help Pakistan defeat New Zealand by five wickets and record their second successive victory in Group-2 of the ICC Men’s T20 World Cup 2021 at the Sharjah Cricket Stadium on Tuesday.

Haris’s effort that was backed by accurate and precise bowling by Mohammad Hafeez, Shaheen Shah Afridi and Imad Wasim limited New Zealand to 134 for eight.

However, what looked like a straightforward run-chase turned nerve-wrecking and nail-biting after Pakistan slipped to 91 for five in 15 overs.

However, Shoaib Malik scored an unbeaten 26 off 20 balls with two fours and six, and Asif Ali struck a priceless 12-ball 27 not out with three sixes and a four to steer Pakistan home with eight balls to spare.

Asif’s performance came after he was hit on the helmet by a ferocious Tim Southee bouncer. Before being hit by Southee, Asif had slapped him for back to back sixes and then added another off Trent Boult as he not only played an international innings of his life but a knock that has strengthen Pakistan’s chances of reaching their first semi-final since 2014.

Pakistan’s next opponent is Afghanistan on Friday in Dubai, followed by matches against Namibia and Scotland on 2 and 7 November, respectively.

Earlier, Babar Azam, for the second successive match, won the toss and put New Zealand into bat. Unlike India, New Zealand were off to a 36-run first stand before Haris Rauf picked up first of his four wickets by rattling the stumps of Martin Guptill (17).

Imad Wasim dismissed Daryl Mitchell (27) and Mohammad Hafeez sent Jimmy Neesham (one) as New Zealand slipped to 56 for three in the 10th over. Kane Williamson (25) and Devon Conway (27) added 34 runs for the fourth wicket before Hasan Ali’s brilliantly ran-out New Zealand captain off his own bowling.

Haris Rauf then took control of the proceedings, accounting for Convay, Glenn Philips (13) and Mitchell Santner (6) to finish with figures of 4-0-22-4, while Shaheen Shah Afridi picked up the scalp of Tim Seifert (8) as New Zealand crawled to 134 for eight.

After reaching 42 for one in the PowerPlay overs, New Zealand reached 60 for three after 10 overs and collected 34 runs off the final five overs.