It’s not ex vs ex, it is about harassment and bullying: Hania Amir 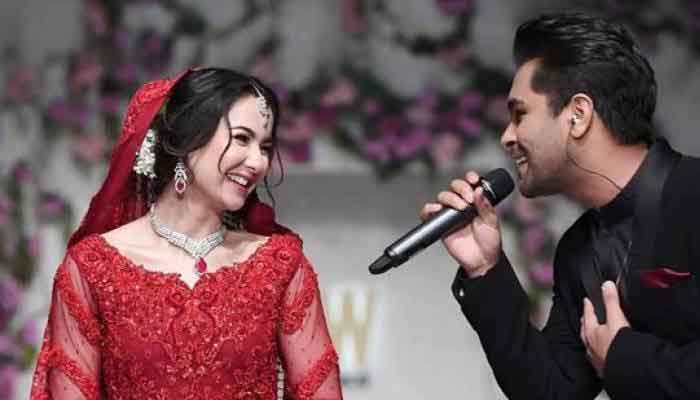 In a long post on Instagram, Aamir seemed to have hit out at her rumoured ex-boyfriend Asim Azhar. Hania said that it is important for her to clearly state it is not an ‘ex vs ex’ debate and her complaint is against harassment and bullying on the internet. She also urged that people should next time clear up their stance if their post was not directed to someone specific.

“I’d like to add that I am not speaking against men. I am speaking up against misogyny and the act of cyber-bullying. It can destroy lives and put people at risk, and that is a very scary reality, which I cannot stand by and merely watch happen to anyone. We must stand with the oppressed regardless of their gender, which I always have and always will, says Hania.

Without naming anyone, Hania further said, “I’m going to state the facts one last time. This is not about what he said or what she said. It is important for me to clearly state it is not an ‘ex vs ex’ debate. It is about shedding light on a much larger issue.”

“My complaint is against a public figure (irrespective of any kind of history) knowingly inciting hate by bullying a woman when she’s trying to pick herself up after the disgust on the internet against her. My complaint is against a public figure thinking it’s funny that a woman is being targeted sexually, objectified, and abused on the internet and openly sharing his sentiment on a public platform for which he received immense support and adulation, if I may add.”

“I am raising my voice against misogyny and the prevalent mindset that a man can get away with absolutely anything on the internet without any shape or form of accountability. Again it is not about an ex vs an ex. It is about the abused vs the abuser.”

The statement further reads: “We as a generation are responsible for paving a way for the next. What we do, how we act and the way we deal with things will set an example for times to come. It’s of utmost importance that we realize our collective responsibility as a generation, as public figures, as human beings.”

“I am never going to shy away from admitting my mistakes and changing for the better. It is not beneath me to apologize. So I feel I should also apologize if I have in any way hurt anyone intentionally or unintentionally ever. If I have. I am sorry,” she said.

“I’d like to add that I am not speaking against men. I am speaking up against misogyny and the act of cyber-bullying. It can destroy lives and put people at risk, and that is a very scary reality, which I cannot stand by and merely watch happen to anyone. We must stand with the oppressed regardless of their gender, which I always have and always will.”

“I feel personal grievances between two people should always remain private and social media isn’t the right medium to express them. And future advice to whoever it may concern if you didn’t mean to target or harm someone with your public remarks please be prompt with your response and clear the air when the narrative is being blown out of proportion and be quick to address it before it creates irreparable damage. Ask me, I’m still trending.”

On a side note, Hania said, “I love you all. Thank you to all the men that came forward in support. All the women that stood by me. My fans for their unwavering love. I am overwhelmed by what the good ones are capable of.” 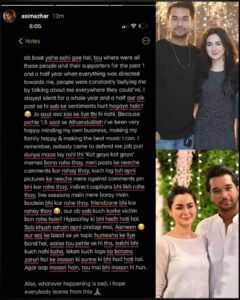 Yesterday, Asim had put up a story on Instagram speaking out after a year and a half, mentioning how he had accepted the trolling and kept quiet after his alleged break-up with the actress. He also mentioned indirectly that someone was having all the fun “when I was getting bashed and trolled”.

Azhar said he is now living a happy life and producing the best music that he ever had.