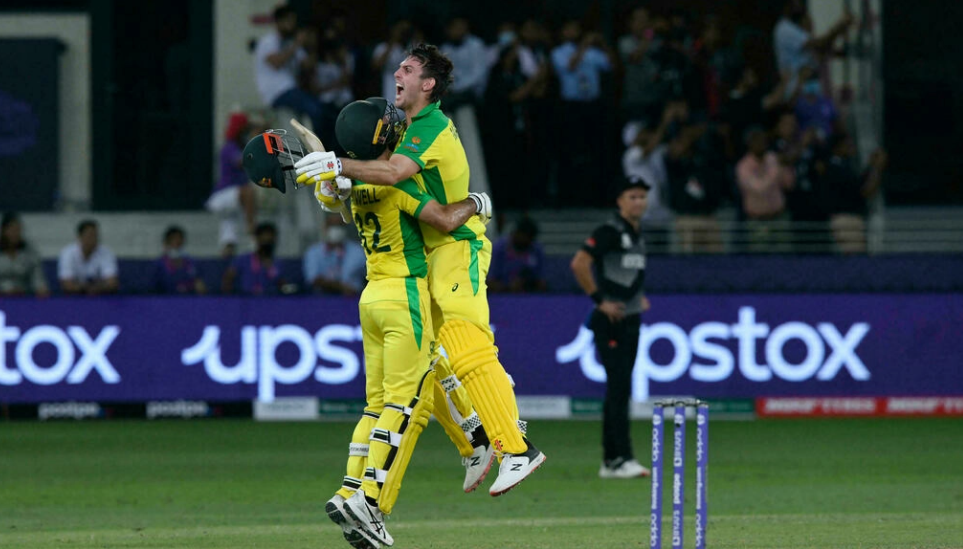 Chasing 173 for victory, Australia depended on a 92-run second-wicket stand between David Warner, who made 53, and Marsh to achieve their target with seven balls to spare in Dubai.

Warner became Trent Boult’s second wicket but Marsh kept up the charge to power Australia home to their long-awaited T20 crown and add to their five 50-over World Cup trophies.

Glenn Maxwell, who made 28, joined Marsh, who hit six fours and four sixes in his 50-ball knock, to put on 66 runs and hit the winning boundary as the Aussies came charging in to celebrate the triumph.

“It’s huge. We felt like a lot of people wrote us off but we spoke about being the first team to do this for Australia and it feels really special,” said Matthew Wade.

Skipper Kane Williamson hit a valiant 85 in New Zealand’s 172-4 after being invited to bat first in a crucial toss won by Aaron Finch as teams chasing have won all but one game at the venue.

Australia, whose previous best was a runners-up finish in 2010, came into this edition’s semi-final with one loss to England and beat Pakistan in the final-four clash with a chase of 177.

‘Superb player’
“Kane’s a superb player,” said Hazlewood. “It was another classical innings, runs all around the ground and he hurts you when you bowl poorly.”

Australia suffered an early blow in their chase when Finch departed for five off Boult as a largely neutral but not packed-to-capacity crowd roared.

#photo1
But the left-right batting pair of Warner and Marsh combined to take apart the bowling with fours and sixes galore.

Marsh hit Adam Milne for one six and two fours on his first three balls of the knock to signal his ruthless intent.

Warner also kept up his punishing act as he hammered leg-spinner Ish Sodhi for 17 runs in one over with just a single to Marsh.

He smoked Jimmy Neesham for a six to raise his third half-century of the tournament but soon fell to Boult.

Warner, with 289 runs in total, ended second behind Pakistan’s Babar Azam (303) in the tournament’s batting chart.

Earlier Williamson, who was dropped on 21, started cautiously but once settled took on the opposition bowling to reach his first half-century of the tournament.

The Kiwis initially struggled and lost Daryl Mitchell caught behind for 11 off Hazlewood.

Opening batsman Martin Guptill failed to get quick runs despite his three boundaries and a 48-run second-wicket stand with Williamson.

Williamson survived a spill by Hazlewood in the deep with the ball popping out of the fielder’s hand to find the boundary. Pace spearhead Mitchell Starc was the bowler.

The captain hit back with two more fours off left-arm quick Starc who was taken for 60 runs from his four overs, to get some momentum into the innings.

Zampa sent Guptill trudging back to the dugout after the opener’s 35-ball 28 but Williamson kept up the charge with two sixes off Maxwell.

Williamson again picked out Starc to smash four fours and one six in a 22-run 16th over and put on 68 with Glenn Phillips, who made 18.

Hazlewood returned in his final over to break the stand with Phillips’ wicket and then got Williamson out with a leg-cutter.

The seventh edition of the tournament was moved out of India due to the coronavirus pandemic to be staged in Oman and United Arab Emirates.

No agreement reached between Pakistan, TTP yet: Muttaqi