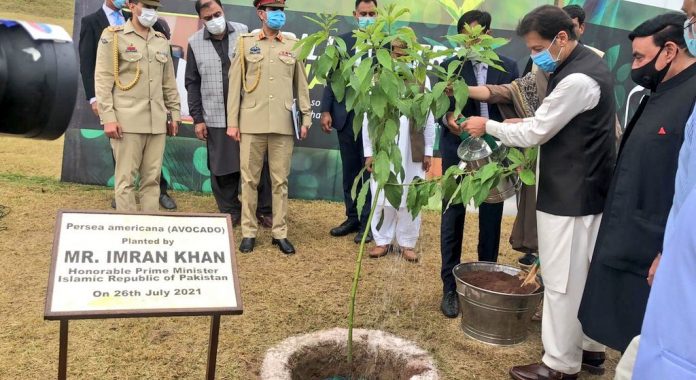 Prime Minister Imran Khan on Monday said as Pakistan faced the impending challenge of climate change, massive plantation was the solution to reverse the negative impacts of environmental degradation.

Addressing at the launch of nationwide monsoon tree plantation drive, the prime minister said deforestation had resulted in an increased levels of air pollution and temperatures in the country, which required a special focus on planting trees.

At the capital’s Fatima Jinnah Park, the prime minister planted the sapling of Avocado (Persea Americana) fruit tree to kick off the plantation campaign.

Speaking on the occasion, the prime minister said the plantation under the Ten Billion Tree Programme would help the country gain its required forest cover, which was unfortunately quite less compared with other countries in the region.

He said ruthless tree-cutting during the previous governments had led to rising pollution in big cities and emphasized that trees were the natural remedy to absorb the airborne pollutants.

Sharing his vision to make every city of Pakistan green, he asked the local administrations including Commissioners and Deputy Commissioners to ensure proper implementation of the plantation drive and also preserve the green covers.

Imran Khan mentioned that the world was acknowledging Pakistan’s role in leading the efforts against climate change, particularly meeting the Bonn Challenge of planting trees.

The nationwide activity is taking place in the rainy season of monsoon as part of the Ten Billion Tree Tsunami under the auspices of the Ministry of Climate Change and the Capital Development Authority (CDA). In the next few weeks, the CDA will plant nearly half a million trees across Islamabad.

Islamabad over the years, has witnessed a massive reduction in tree cover, particularly in the last two decades. However, the green graph is gradually showing an upward trend after the government of Prime Minister Imran Khan carried out a massive tree plantation campaign under the Clean and Green Pakistan Initiative.

Two days ago, Prime Minister Imran Khan planted a sapling in Nathia Gali’s scenic resort to promote plantation for the sake of preserving the natural environment. He also urged the nation especially youth to join hands in gearing up for the plantation campaign.

The prime minister, even before joining the politics, has long been a strong advocate for the importance of plantation for the future of a clean and green Pakistan.