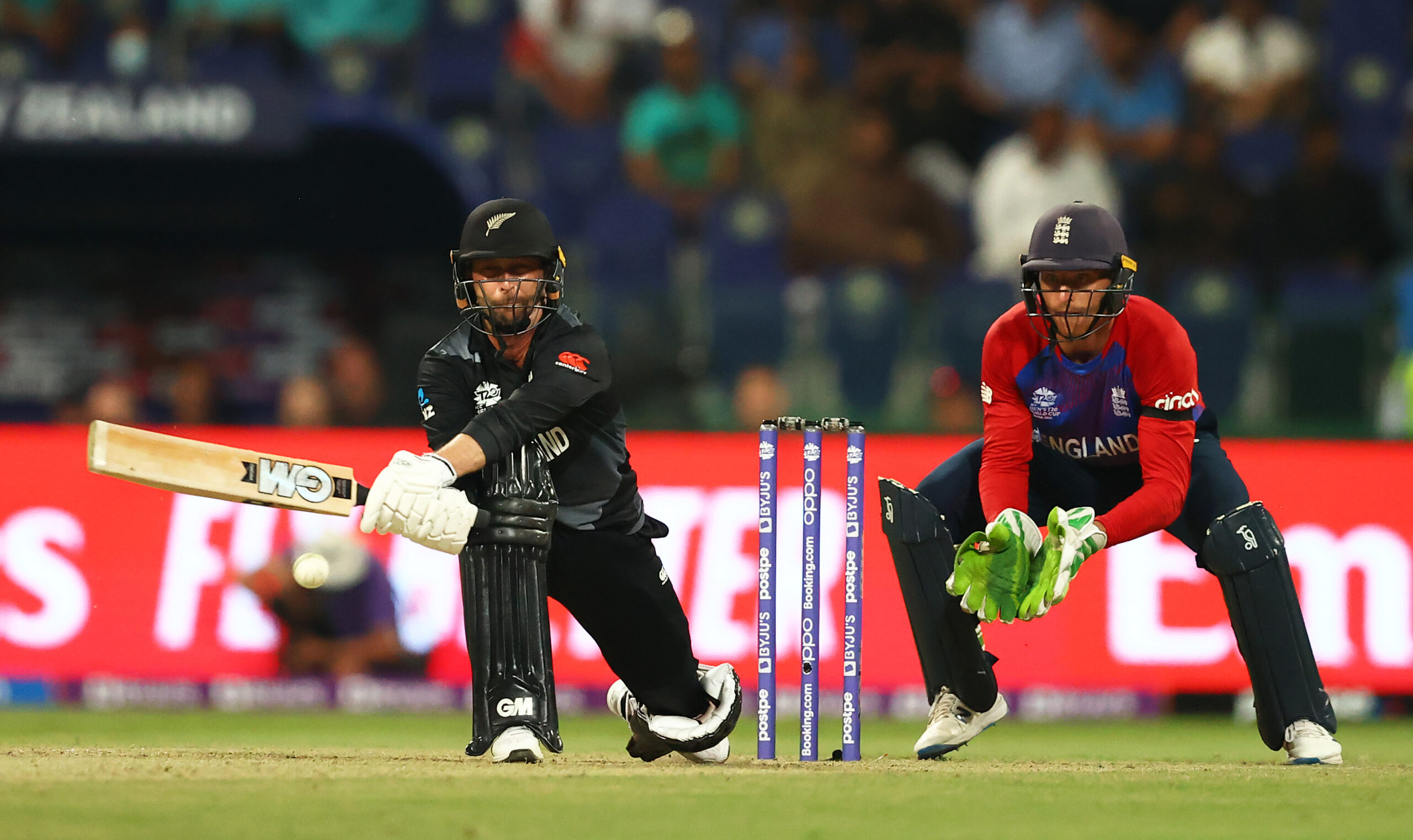 Daryl Michell was the hero as New Zealand chased down 167 in Abu Dhabi to seal a spot in the World Cup final.

The Black Caps opener carried his bat in a stunning knock, producing a brilliant late display of power-hitting as New Zealand raced through the gears to avoid a nervy finish, winning with an over to spare.

Chris Woakes’ two early wickets in the Powerplay had restricted the Kiwi chase. But a steadying knock from Devon Conway and a quickfire 26 from James Neesham put New Zealand on top, with Chris Jordan’s 16th over going for 23 runs to swing the match in New Zealand’s favour.

And it was Mitchell who finished the job, hitting 25 off his last seven deliveries to win it with an over to spare.

Scoring was slow and steady for much of England’s effort with the bat, with openers Jonny Bairstow and Jos Buttler steady but unspectacular through the powerplay, before Malan and Ali’s rebuilt the innings.

Some big hits late on from Livingstone and Ali, who finished on 51*, helped England to 166/4.

But England needed a big effort from their bowling attack to tie New Zealand down in the reply, and were unable to do so, missing out on a third-straight place in a World Cup final.

Woakes continued his outstanding record in the Powerplay throughout the World Cup when he gave England a big double breakthrough as they looked to defend 166/4.

The England seamer had been whacked for four by Guptill off the first ball of the chase, but had his revenge two deliveries later as the Black Caps dangerman miscued the easiest of catches to Ali as England got the breakthrough they desperately wanted.

And Kiwi captain Williamson fell in Woakes’ next over, looking to get going after a slow start and mis-hitting a ramp shot straight to Adil Rashid to leave New Zealand two down early.

A tight remainder of the Powerplay saw New Zealand reach 36/2 after six overs, with at one stage the Black Caps failing to score a run off the bat for 12 consecutive deliveries.

Devon Conway and Daryl Mitchell led the rebuild in search of 167 for a place in Sunday’s final, but Conway’s outstanding 46 off 38 came to an abrupt end when he was stumped off Livingstone.

England’s all-rounder bowled his full set of four overs as Eoin Morgan targeted specific match-ups, and Livingstone revelled in the responsibility, also removing the dangerous Glenn Phillips to finish with strong figures of 2/22.

New Zealand had needed 109 off the last ten over, and with the required rate steadily climbing it was clear that they needed a big finish. And that is exactly what they got, with Neesham launching 27 off just 11 deliveries to turn the game back in New Zealand’s favour.

Nineteen of Neesham’s runs came off Jordan’s pivotal 16th over, which went for 23 runs in total, just as a tense finish looked likely.

And Mitchell, who had anchored the innings for long periods, joined the party by going big himself to race to his half-century and finish on an unbeaten 72 from 47.