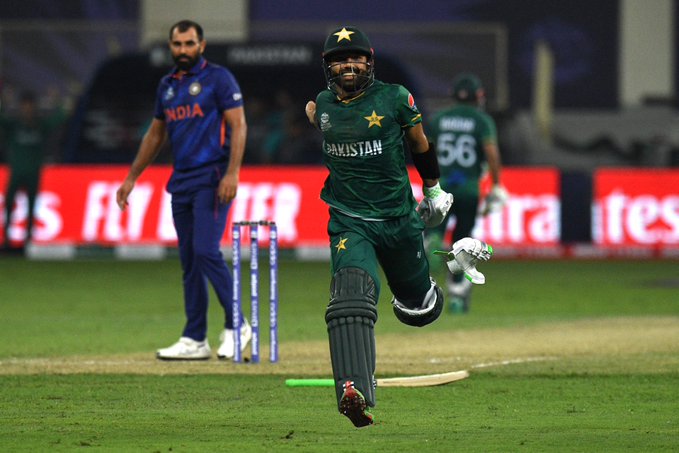 Pakistan made history in Dubai, beating neighbours India in a World Cup for the first time to move top of Group 2.

Set 152 to win, Pakistan openers Babar Azam and Mohammad Rizwan produced a batting masterclass to chase down the target without losing a wicket and with 13 balls remaining.

The loss is not only India’s first at a World Cup to Pakistan, but is also their first-ever 10-wicket defeat in T20 internationals.

Earlier Virat Kohli produced a captain’s knock to help India recover from a shaky start to set Pakistan 152 to win in the crunch Group 2 game in Dubai.

Kohli’s 57 off 48 deliveries was his 29th T20 half-century for India and his 10th at World Cups, and came at a particularly important time for his team after a fiery opening spell from Shaheen Shah Afridi blew apart the top order.

Afridi produced two stunning deliveries to get Pakistan off to a flier, after Babar Azam had won the toss and opted to bowl first.

The 21-year-old’s rocket of a yorker had Rohit Sharma trapped plumb in front for a first-ball duck inside the opening over.

And the Pakistan left-armer bagged the scalp of KL Rahul in his second over, swinging one back through the gate at high pace to castle the opener’s stumps.
Suryakumar Yadav’s short-lived counter-attack was ended by a brilliant catch by Mohammad Rizwan off Hasan Ali.

But captain Kohli anchored India’s recovery, helping his side to 60/3 at the midway point of the innings, before upping the scoring rate in the second half of the innings.

Rishabh Pant’s 39(30) had Pakistan sweating before Shadab Khan removed him caught and bowled in the 13th over. And Ravindra Jadeja, promoted up the order, struggled to get going with a patchy run-a-ball 13.

But Kohli looked secure throughout his knock, bringing up the half-century with a clip to deep midwicket as he helped his side to a competitive total – something that seemed some way off at 6/2 in the third over.

Kohli’s fifty means he goes above Chris Gayle to become the leading half-century scorer in T20 World Cup history with 10, and he now averages 83.4 across 17 World Cup innings.

But his innings came to an end at the hands of Afridi, who returned for the penultimate over, bamboozling the India skipper with a slower-ball bouncer that was edged behind.

Hardik Pandya and Bhuvneshwar Kumar scrambled 18 runs off the last eight balls, leaving Pakistan with 152 to chase for a first T20 World Cup win over their neighbours.

Rizwan got Pakistan’s reply off to a phenomenal start, smashing ten runs off the first three deliveries of the innings. And while the Pakistan openers slowed the scoring rate, the partnership was exactly what their side required, eating away at the target with minimal risk while not allowing the required rate to climb too high.

And the pair hit full flow as the innings progressed, with Rizwan finishing on 78* from 55 and Azam stroking 68* off 52 in a partnership of the highest quality.

The result gets Pakistan’s T20 World Cup campaign off to a perfect start by putting two points on board, with games against Afghanistan, New Zealand, Namibia and Scotland to come in the Super 12 stage.