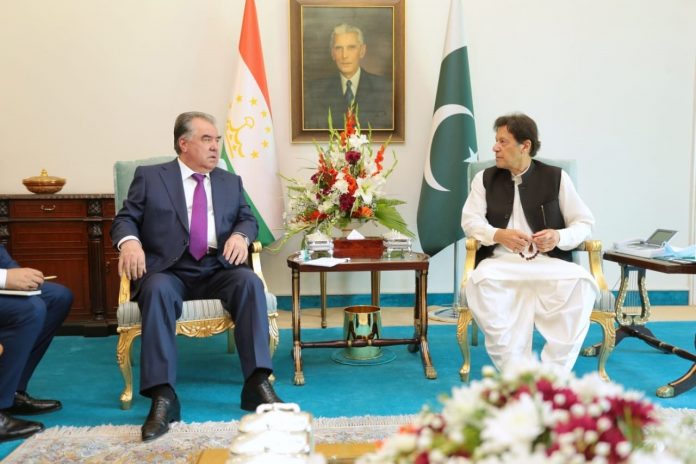 Prime Minister Imran Khan and President of Tajikistan Emomali Rahmon Wednesday while expressing satisfaction over the excellent bilateral cooperation at the multilateral fora, reiterated their commitment to further strengthen it in the future for the global and regional peace and development.

A joint declaration between the two countries enlisting ‘next steps in building strategic partnership for regional solidarity and integration, said the two leaders noted with appreciation the progress achieved in the implementation of the flagship power project of CASA-1000 and reiterated their resolve to complete the project at the earliest.

They agreed that the materialization of the project would establish energy connectivity leading to prosperity for all.

They emphasized the need to tap the vast potential that remained unexplored, particularly in the areas of trade, energy, connectivity, agriculture and industry for the mutual benefit.

They underscored the importance of road, rail and air links between the two countries for promotion of bilateral as well as regional connectivity and resolved to improve the existing facilities and explore new options for improving rail, road and air connectivity.

On the invitation of prime minister, president of Tajikistan Emomali Rahmon, accompanied by a high-level delegation, is on a two-day official visit to Pakistan.

The two leaders exchanged views on regional and global issues and urged the international community to play its active role and help peacefully resolve all the outstanding disputes around the world in line with the UN Security Council resolutions and the principles of international law.

During their meeting, the prime minister reiterated Pakistan’s support to Tajikistan’s membership in the Quadrilateral Traffic-in-Transit Agreement (QTTA).

He informed the Tajik president about operationalization of Gwadar Seaport and offered Tajikistan to avail the facility of Pakistani seaports and CPEC.

The prime minister highlighted that Pakistani seaports offered the most efficient and economic route to Central Asian countries including Tajikistan.

In these regards the president of Tajikistan offered to convene Joint working group to address issues of transit trade at earliest and invite Afghanistan to participate in its meeting to boost trade and commerce with the view to engage broader region in this process.

During bilateral meetings, the two leaders held in-depth and wide-ranging discussions covering all aspects of bilateral cooperation and regional and international issues of mutual interest.

Both leaders reaffirmed the fraternal ties existing between the two countries marked by shared faith, history, culture and geography.

While expressing satisfaction at the steadily growing relations between Pakistan and Tajikistan, the two leaders expressed their resolve to elevate bilateral ties to a new level of strategic cooperation for the mutual benefit of the two countries and peoples.

The two leaders exchanged views on the rise of Islamophobia world-wide and expressed support for the joint initiatives and collective efforts of the OIC to combat this scourge including through the designation of 15 March as International Day to combat Islamophobia by the UN General Assembly.

Both leaders had an in-depth discussion on security situation in Afghanistan and ongoing peace process.

The president appreciated Pakistan’s role in facilitating the Afghan peace process. The two sides emphasized on an Afghan-owned and Afghan-led resolution of the conflict through an inclusive negotiated political settlement.

The two leaders emphasized enhanced cooperation in education, culture and tourism through mutual development and joint ventures and highlighted the need to facilitate people-to-people contacts.

The two leaders noted with pleasure the growing bilateral cooperation in the field of defence & security and reiterated their resolve to further boost the same in order to overcome the common security challenges faced by the two countries and the region as a whole.