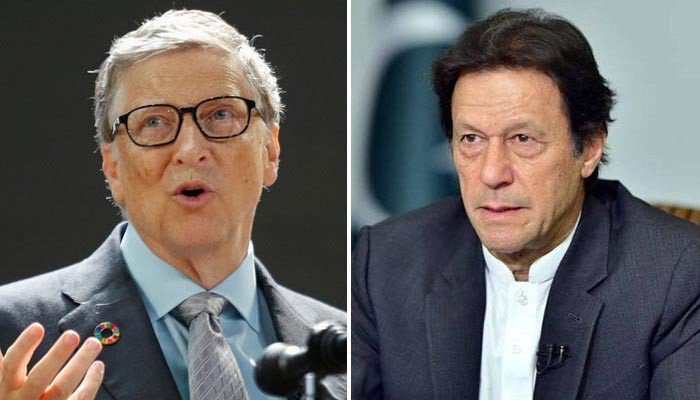 Prime Minister Imran Khan spoke with Mr. Bill Gates, co-chair of the Bill and Melinda Gates Foundation (BMGF), on Tuesday, to discuss polio eradication efforts and the Foundation’s support towards improving nutrition as well as financial services in Pakistan.

The Prime Minister updated Mr. Gates on Pakistan’s continued progress against polio eradication and appreciated the invaluable assistance provided by BMGF in that regard. He added that the country has reported only one case of wild poliovirus (WPV) this year and positive WPV environmental samples have decreased substantially.

The Prime Minister emphasized that while the progress was positive, the work is still ongoing. He stressed that his government remains committed to ending all forms of polio in the country. Mr. Gates praised the Prime Minister for the progress, and pledged the Foundation’s continued support to the Pakistan polio program for ensuring that no child in Pakistan is at risk of paralysis due to poliovirus.

Specifically, Mr. Gates noted the positive impact of the Prime Minister’s leadership in convening a meeting with Deputy Commissioners in high-risk polio districts in August. Both the Prime Minister and Mr. Gates expressed concern regarding the health system in Afghanistan, the only other country in the world that is polio endemic along with Pakistan.

They discussed the importance of polio campaigns resuming in Afghanistan to stop the disease and protect Pakistan’s recent gains towards ending polio. The Prime Minister highlighted that more than half of the population in Afghanistan was living below poverty line and in dire need of financial assistance. He requested Mr. Gates to consider providing humanitarian assistance to the Afghan people.

Mr. Gates congratulated the Prime Minister for Pakistan’s COVID-19 vaccine roll-out and noted the Foundation’s continued support of government-led programs, including Ehsaas which is making impressive progress in reducing stunting, and the digitization of the National Savings Program through Karandaaz.

Mr. Gates offered continued collaboration through the Gates Foundation to improve the health and well-being of Pakistanis. The Prime Minister thanked Mr. Gates for his Foundation’s valuable partnership with Pakistan.

PPP to form govt in center and provinces: Bilawal

Global displacement from war, crises doubles in a decade: UN