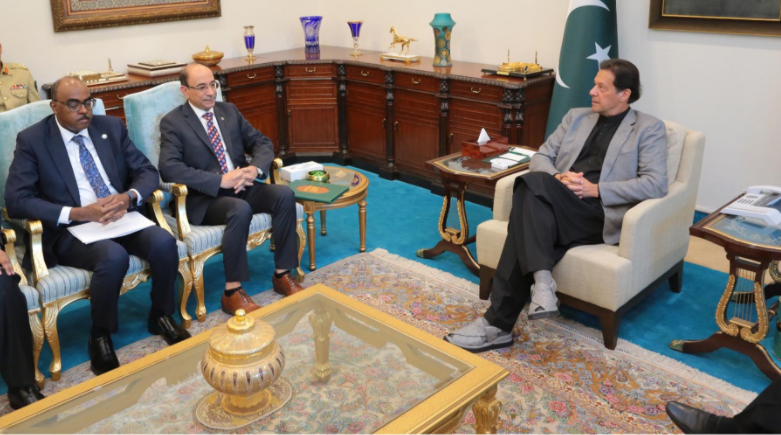 Prime Minister Imran Khan underlined the importance of the OIC’s principled position on the Jammu and Kashmir dispute and the resolute support of the Islamic Ummah to the just struggle of the Kashmiri people for their inalienable right to self-determination.

The Assistant Secretary General (ASG) for Humanitarian Affairs, Mr. Tarig Bakhit, and senior members of the OIC delegation were also present at the occasion.

The Prime Minister highlighted the atrocities being committed by India in the Indian Illegally Occupied Jammu and Kashmir (IIOJK), with over 900,000 troops deployed in the occupied territory, making it the most militarized zone in the world.

The Prime Minister underscored that the illegal and unilateral actions of India since 5 August 2019 were aimed at disenfranchising the Kashmiris and altering the demographic structure of the IIOJK in order to convert it into a Hindu dominated territory.

These illegal actions were in clear violation of the relevant UN Security Council Resolutions and international law, including the 4th Geneva Convention, the Prime Minister stressed.

The Prime Minister underscored the urgent need to allow access to the OIC, UN and other human rights organizations international media to visit IIOJK and conduct independent investigations into and reporting upon human rights abuses. He also called for provision of humanitarian support and assistance to the people of IIOJK.

The PM strongly underscored the need for the Islamic world to forge greater unity against the challenges posed by the extremist political ideologies stoking Islamophobia. He also underlined the imperative of peaceful resolution of international conflicts and longstanding disputes including Jammu & Kashmir and Palestine.

PM Khan reiterated that a just settlement of the Jammu and Kashmir dispute in accordance with the UN Security Council resolutions and the wishes of the Kashmiri people remained a prerequisite for durable peace and stability in South Asia.

Asif Ali voted ICC Player of the Month for October