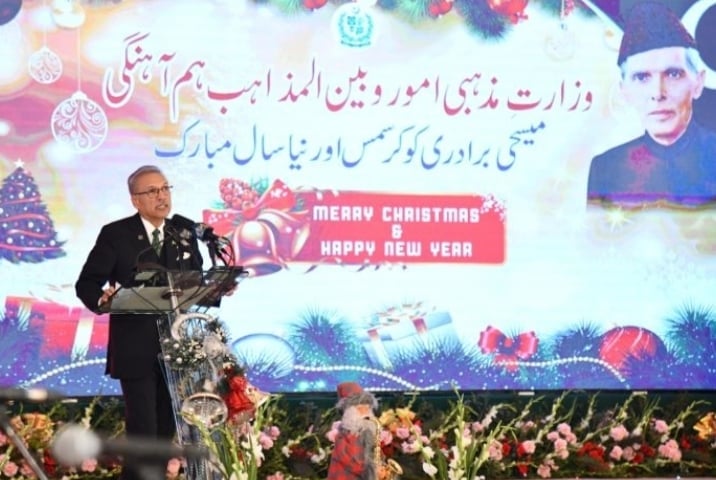 ISLAMABAD, Dec 21 : President Dr Arif Alvi Tuesday felicitated the Christian community across the world on the celebrations of Christmas and said the world needed to spread the message of peace espoused by Prophet Muhammad (PBUH) and Jesus Christ Speaking at an event to celebrate Christmas here, he said Christmas was an occasion of celebrations and a day to remember that Jesus Christ was a great messenger of peace. The President urged the world to avoid oppression, conflict, and violence and promote tolerance.

He said Prophet Muhammad (PBUH) said that those who forgive would have the highest rank in Jannah. Now the world needed most to learn from the Jesus Christ’s message and show mercy and forgive others. Both Prophet Muhammad (PBUH) and Jesus Christ urged their followers to practice tolerance and live peacefully, he stressed. He said the world was witnessing oppression and was suffering from wars and massacre, adding women and children were suffering from oppression and cruelty.

He said he was happy that the Orthodox, Catholic and Protestant churches had tried to stop oppression and wars in the world. The Pope recently said that the Mediterranean sea had become a graveyard of migrants and he was continuously saying that the people who were leaving their countries due to cruelty and atrocities should be given refuge and same was the message of the Jesus Christ, he noted. He said the message of the Christ was that if you will set a goal you will achieve it and if you will come into contact with God you will get his blessings. “Do unto others what you want others to do unto you,” he quot

Jesus Christ also said love God with your mind, heart and soul as it would bring peace and harmony to the world, President Alvi observed. He said the incident of Sialkot was a matter of shame for the nation. He said Prophet Muhammad (PBUH) also stressed on tolerance and kindness. He said Prophet Muhammad (PBUH) and Jesus asked people to avoid arrogance as Allah loved humbleness. The President said great personalities belonging to Christian community served Pakistan. Speaking on the occasion, Minister for Religious Affairs and Interfaith Harmony Noorul Haq Qadri said all religions talked about peace and tolerance. Pakistan belonged to people of all religions including Muslims, Christians, Sikhs and Hindus. He recalled that minorities played an important role in the creation of Pakistan and many Christians, Hindus and Sikhs decided to stay in the country at the time of partition. He told that a law will be made against forced conversions and children in schools would be taught about the sanctity of religions and all the places of worship. The President along with others also cut a cake at the event attended by ministers, members of Parliament, bishops and citizens belonging to different religions. Participants also sang hymns to celebrate Christmas.