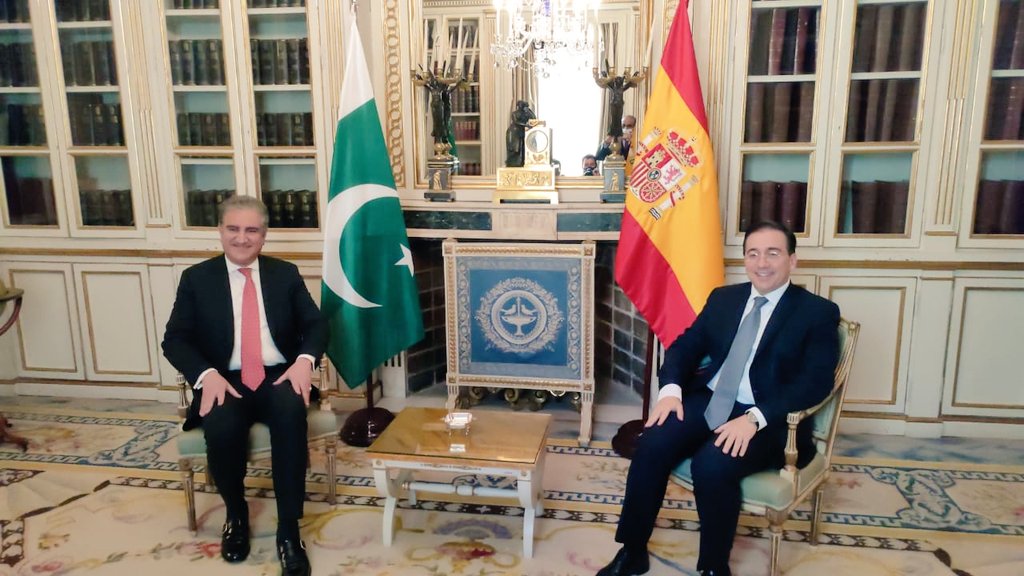 “We were delighted to celebrate 70 years of Diplomatic Relations last year,” Qureshi said in a tweet after the meeting.

Earlier, he interacted with members of the Foreign Relations Committee of Congress of Deputies, headed by Pau Mari Klose, today, and exchanged views on various aspects of bilateral relations between Pakistan and Spain.

Highlighting the enormous potential between the two countries in diverse areas, FM Qureshi stressed the importance of translating them into tangible economic outcomes deepening Pakistan-Spain relations. Apprising the Committee about Pakistan`s policy shift from geopolitics to geo-economics, resulting in incentives and investment opportunities, the Foreign Minister underlined that the Spanish investors should not miss out on Pakistan.

The FM apprised the Committee about the constructive role Pakistan has played in coordination with the international community, and to stabilize the situation. Furthermore, the Foreign Minister conveyed that Pakistan has been actively participating in key Afghanistan-centered mechanisms for evolving a coherent and coordinated approach on the way forward for peace and stability.

The Foreign Minister underlined the need of engaging interim Afghan government by the international community, especially the EU, to preserve the development gains made through EU investment over the past two decades.

Reaffirming Pakistan’s desire of maintaining good relations with neighboring countries to promote peace in the region, the Foreign Minister highlighted India´s illegal and unilateral actions of 5 August 2019 in IIOJK which were a huge setback to Pakistan´s efforts to build regional peace.

The FM stressed that revisiting these measures would pave the way for a fruitful and result-oriented dialogue between Pakistan and India.

Referring to a strong bond of 125,000 Pakistani community in Spain, the Foreign Minister apprised the Committee about their positive contribution in the Spanish economy and their social service during the lockdown in the Covid pandemic in Spain.