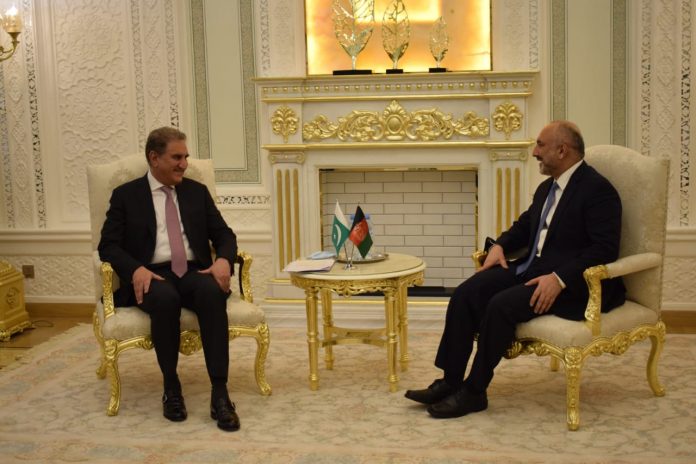 Foreign Minister Makhdoom Shah Mahmood Qureshi on Tuesday reaffirmed Pakistan’s consistent support to a peaceful and united Afghanistan, at peace with itself and with its neighbours.

“Pakistan supports a peaceful and stable Afghanistan, which would yield mutual dividends and benefits in terms of peace in the region, economic prosperity and regional connectivity,” he said.

The FM expressed these views during a meeting with Foreign Minister of Afghanistan Hanif Atmar held on the sidelines of Shanghai Cooperation Organization (SCO) Council of Foreign Ministers meeting in Dushanbe.

During the meeting, views were exchanged on the latest developments in Afghanistan and the way forward.

In view of the withdrawal of international forces from Afghanistan, the Foreign Minister urged the Afghan leaders to achieve a negotiated political settlement at the earliest, adding that such an outcome would bring peace, stability and prosperity in Afghanistan.

He remarked that Afghan leaders should seize the historic opportunity and take advantage of international convergence on the final settlement of the Afghan conflict by working together an inclusive, broad-based and comprehensive political settlement.

The Foreign Minister expressed concern on high level of violence, which has resulted in innumerable loss of lives. He emphasized immediate steps to decrease violence, leading to comprehensive ceasefire.

Highlighting that negative statements could not cloud Pakistan’s positive contribution to the Afghan peace process, and that blame game would not serve the region, the Foreign Minister urged his Afghan counterpart to address all concerns through established institutional mechanisms, including APAPPS.

He said that Pakistan looked forward to hosting review meeting of APAPPS in Islamabad at the earliest.