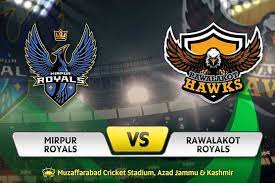 Teams Rawalakot Hawks and Mirpur Royals are ready to face each other in Eliminator 2 of the Kashmir Premier League today as they fight for the spot in Finals which will be played tomorrow at the Muzaffarabad Stadium, Kashmir.

The Shoaib Malik-led Mirpur Royals will face off Afridi-led Rawalakot Hawks for the second time in the tournament.

The Hafeez 11, Muzaffarabad Tigers have already qualified for the finals as they won the first eliminator against Overseas warriors.

Both the teams look forward to winning the match to make their way to the finals. The favorites being Afridi’s team.