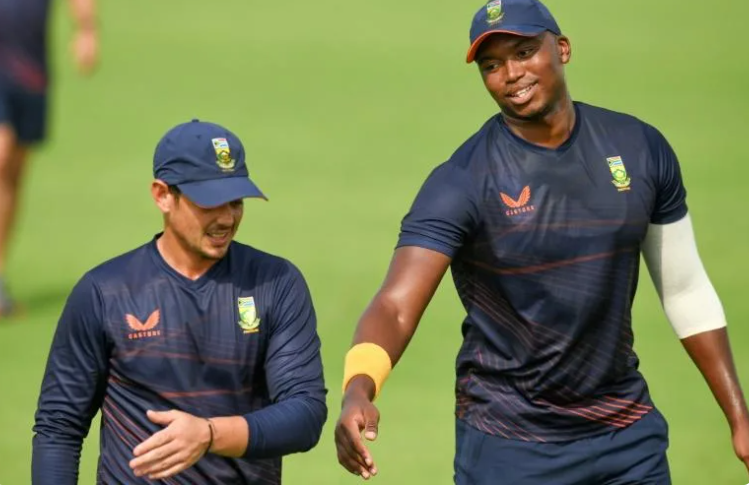 South African star Quinton de Kock has apologised for refusing to take the knee in his team’s Twenty20 World Cup match and said he would be “happy” to do it.”

“I would like to start by saying sorry to my teammates, and the fans back home,” de Kock said in a statement on Thursday.

“I never ever wanted to make this a Quinton issue. I understand the importance of standing against racism, and I also understand the responsibility of us as players to set an example.

“If me taking a knee helps to educate others, and makes the lives of others better, I am more than happy to do so.”

De Kock explained he comes from a mixed race family with his half-sisters being coloured and his stepmother is black.

“For me, Black lives have mattered since I was born. Not just because there was an international movement,” said the 28-year-old.

De Kock pulled out of Tuesday’s match against holders West Indies for “personal reasons”, defying orders from Cricket South Africa (CSA) to their players on following the anti-racism gesture.

They acted after pictures emerged from the team’s first game against Australia at the weekend where some players knelt and some stood.

Cricket South Africa welcomed the move and said, “The Proteas men’s team agreed to align and unify in taking the knee for the remaining fixtures of the World Cup campaign.”

The board added their stance against racism “is a moral issue, not a political issue”.

De Kock, a former national captain, refused to take a knee in South Africa’s Test series in the West Indies earlier this year.

Temba Bavuma, the national cricket team’s first ever black African skipper, said de Kock’s decision and the events that followed made it the toughest day of his life.

The Proteas though went on to win the match convincingly by eight wickets in Dubai.

They next play Sri Lanka in Sharjah on Saturday and de Kock is expected to be back in the team.

“I did not, in any way, mean to disrespect anyone by not playing against West Indies, especially the West Indian team themselves,” said de Kock.

“Maybe some people don’t understand that we were just hit with this on Tuesday morning, on the way to a game.

“I am deeply sorry for all the hurt, confusion and anger that I have caused. I was quiet on this very important issue until now.”

Bavuma had expressed his “surprise” over de Kock’s decision after the board instructed the players to stand by the movement on the morning of their second group match.

Bavuma revealed he was apprised of de Kock’s refusal in the team bus, but said he had “respect” for his team-mate’s conviction.

The South African team took the knee in unison alongside the West Indies players prior to the match.

“Since our chat with the board last night, which was very emotional, I think we all have a better understanding of their intentions as well,” said de Kock.

“I wish this had happened sooner, because what happened on match day could have been avoided.”

“I’ve been called a lot of things as a cricketer. Doff. Stupid. Selfish. Immature. But those didn’t hurt.

The board admitted, “the timing of its directive earlier this week may have been unsettling for the players in the lead-up to the match against the West Indies.”

De Kock is one of his country’s star players and a regular choice across all three formats.

The wicketkeeper/batsman has made over 10,000 international runs and was briefly captain of the Test side before stepping down earlier this year.

De Kock thanked his teammates for their supprt and called Bavuma, “a flipping amazing leader”.

Almost all the teams participating in the T20 World Cup have taken the knee including England, India and Pakistan.

Nkwe’s resignation came against a backdrop of widespread criticism of Boucher following revelations made at hearings into racism in South African cricket.

The criticism intensified when black former players alleged they were not made to feel welcome in the national team environment during the period in which Boucher was a prominent member of the team.

Pakistan, SA to lock horns in ODIs for first time since 2019 World Cup