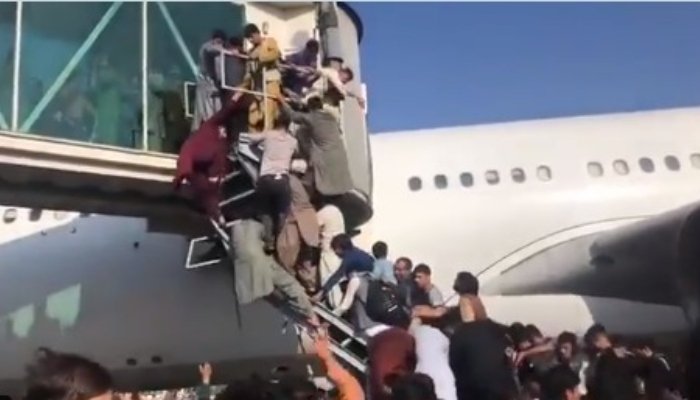 Earlier, Monday morning, the Taliban have taken over the Kabul airport as per sources.

Reports suggest 2 people were killed by Us troops gunshots as Afghanis were trying to breach the safe area line set by the US army troops.

Clashes are going on between Taliban and US army troops, while people on the other hand are seen clinging to planes and running towards planes standing to get out of Afghanistan.

US Forces taking their positions at the Kabul airport to secure the airport. Some gunfire was reported this morning to control the chaos and crowd. pic.twitter.com/EplmF9MbHQ

“The crowd was out of control,” the official told Reuters by phone. “The firing was only done to defuse the chaos.”

The Taliban have taken over city by city in a few days, with entering the capital Kabul without firing a single gunshot on Sunday as Ex-President Ashraf Ghani resigned and fled to Tajikistan according to reports.

With the Taliban taking over the airport, the US army troops are looking towards taking out their airplanes and people from Kabul without any chaos.

A US Department of State plane has left Kabul airport with TK707 still on the tarmac. Also TVR750, AI126 have been told to leave Afghanistan airspace. So I guess no planes are allowed in. Lots of craziness happening right now! #Afghanistan #Kabul #kabulairport

No resistance by forces during Kabul takeover, says Taliban