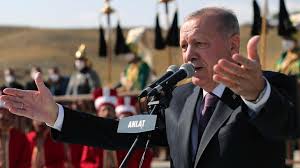 Turkish President Recep Tayyip Erdogan said Saturday he had tested positive for Covid-19 but was not experiencing severe symptoms.

“After experiencing light symptoms, my wife and I tested positive for Covid-19. We have a mild infection thankfully, which we learned to be the Omicron variant,” the 67-year-old president said in a tweet.

We remain on duty. We will continue our work from home. We hope for your prayers,” Erdogan added.

“God willing we will shake this infection off together with Mr Tayyip,” his 66-year-old wife, Emine Erdogan, tweeted.

Turkey has recorded around 12 million cases of Covid-19 and nearly 90,000 deaths since the start of the pandemic.

Turkey requires people to isolate for seven days if they test positive. However if they test negative on the fifth day, they can leave quarantine.

The country’s daily number of cases has risen to over 100,000 in recent weeks, which officials have attributed to the highly contagious Omicron variant.

Masks are widely used in Turkey but there are no restrictions with schools and universities still open, and life continuing as normal without curfews.

The latest official figures on Saturday showed 52.5 million have had their second vaccine dose in Turkey, which has a population of around 85 million.

More than 25 million Turks have also got their third dose and officials continue to push for citizens to get vaccinated.

The Barron’s news department was not involved in the creation of the content above. This story was produced by PMC.

Iran says US sanctions move ‘good but not enough’