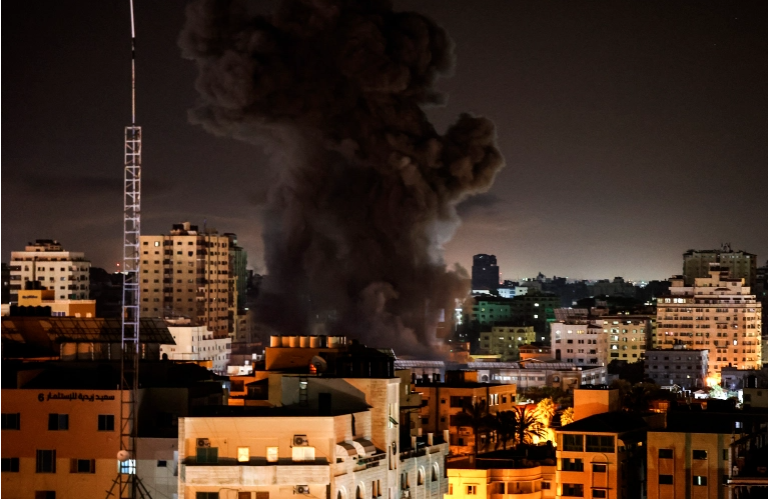 The United States on Monday blocked — for the third time in a week — the adoption of a joint UN Security Council statement calling for a halt to Israeli-Palestinian violence, triggering a new emergency closed-door session set for Tuesday.

The text drafted by China, Tunisia and Norway was submitted late Sunday for approval Monday by the council’s 15 members, as Israeli jets continued to pound the Gaza Strip and the death toll from a week of violence passed 200.

The United States indicated that they “could not currently support an expression” by the Security Council, one diplomat told AFP.

The Norwegian diplomatic mission to the UN announced that the Security Council would hold a new emergency closed-door meeting on the Israeli-Palestinian conflict Tuesday — its fourth since May 10.

“The situation on the ground continues to deteriorate. Innocent civilians continue being killed and injured. We repeat: stop the fire. End hostilities now,” the delegation said on Twitter.

The Security Council has held three emergency meetings on the escalating violence in the past week, the latest on Sunday, without reaching a common position — with Israel’s main ally the United States accused of obstructionism.

UN spokesman Stephane Dujarric underlined the importance of taking a consolidated position on the conflict.

“I would really restate the need for a very strong and unified voice from the Security Council, which we think will carry weight,” he told a press conference.

The UN General Assembly will hold an in-person debate on the Israeli-Palestinian clashes at 1400 GMT on Thursday, assembly spokesman Brenden Varma said.

According to diplomats, the session will take place at a ministerial level and several government officials have already indicated they would take part.

The latest draft text, seen by AFP, called for “de-escalation of the situation, cessation of violence and respect for international humanitarian law, including the protection of civilians, especially children.”

It voiced the council’s “grave concern” at the Gaza crisis and its “serious concern” regarding the possible eviction of Palestinian families from their homes in East Jerusalem, opposing “unilateral actions” likely to further escalate tensions.

The draft also welcomed international efforts to de-escalate the situation, without reference to the United States, and reiterated the council’s support for a negotiated two-state solution allowing Israelis and Palestinians to “live side by side in peace within secure and recognized borders.”

The US refusal to endorse a joint Security Council statement has been met with disbelief by its allies.

“We are just asking the US to support a statement by the Security Council that would pretty much say similar things which are being saying bilaterally from Washington,” one diplomat told AFP on condition of anonymity.

President Joe Biden’s administration has insisted that it is working behind the scenes, including through a visit to the region by an envoy, and that a UN statement could backfire, according to diplomats.

At a news conference in Copenhagen on Monday, US Secretary of State Antony Blinken defended the decision to block a Security Council statement calling for an end to the hostilities.

“We’re not standing in the way of diplomacy,” Blinken stressed.