US State Department spokesman grilled by journalist on Palestine stance 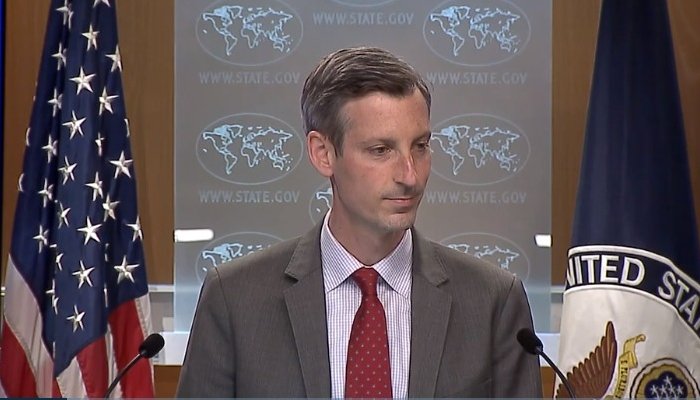 US State Department Spokesperson Ned Price was visibly shaken when he was challenged by a journalist over his statement on the Israel aggression against unarmed Palestinian protesters.

Price, in his opening statement, condemned “the barrage of rocket attacks fired into Israel in recent hours”, adding that the US recognises Israel’s legitimate right to defend itself and to defend its people and its territory.

“It is critical for all sides to ensure calm and de-escalate tensions and avoid violent confrontations, such as the responsible decision to reroute today’s parade,” he said.

The US state department spokesperson refused to comment on reports that nine Palestinian children were killed in the Israeli airstrikes, instead saying Washington was concerned about the febrile situation in Israel, the West Bank, and the Gaza Strip, including violent confrontations in Jerusalem.

"Do you condemn the killing of children?”

Reporters press US State Department on Palestinian right to self-defence amid crisis in Jerusalem https://t.co/RiDFVsJbMh pic.twitter.com/S9lhYDlV1N

The reporters present during the press briefing, however, didn’t let Price off the hook easily.

A journalist asked the US State Department spokesperson whether he thought Israel’s retaliatory strikes against alleged Hamas targets in Gaza were within the country’s right to self-defence.

“This is a very fluid situation. I would hesitate to comment on operations beyond the rocket fire that is clearly targeting innocent civilians in Israel. So I would hesitate to speak to specific operations that have just occurred, but the broader principle of self-defence is something we stand by on behalf of Israel and every other country,” replied the US official.

In response, Price said self-defence often includes the use of force.

Price said the US believed in the concept of self-defence, adding that every state has the right to it.

“I’m asking: Do you condemn the killing of Palestinian children?” grilled the reporter, again.

“Obviously – and these reports are just emerging. And I understand – I was just speaking to the team,” said Price.

“I understand we don’t have independent confirmation of facts on the ground yet, so I’m very hesitant to get into reports that are just emerging.

“Obviously, the deaths of civilians, be they Israeli or Palestinians, are something we would take very seriously,” he said.

When told that the Israeli Supreme Court ruling on the Sheikh Jarrah evictions was “absurd”, Price said the US had called on the Jewish state to treat the Palestinians with “compassion and with humanity in this case”.

At least 20 people were killed, including nine children and a senior Hamas commander, and 65 others wounded, Gaza authorities said.

Israeli Prime Minister Benjamin Netanyahu warned that Hamas had crossed a “red line” by directing missiles towards Jerusalem and that the Jewish state would “respond with force”.

“We will not tolerate attacks on our territory, our capital, our citizens and our soldiers. Those who attack us will pay a heavy price.”

Israel’s army said 150 rockets had been launched from Gaza, dozens of which were intercepted by the Iron Dome Aerial Defense System, with no casualties reported.

“We have started, and I repeat started, to attack military targets in Gaza,” army spokesman Jonathan Conricus said.

“We have made preparations for various scenarios, including high intensity ones… Hamas will get the message.”

The military said it had targeted “two rocket launchers, two military posts”, a tunnel and eight Hamas operatives in Gaza.

Hamas sources confirmed to AFP that one of their commanders, Mohammed Fayyad, had been killed.

Tensions in Jerusalem have flared since Israeli riot police attacked Palestinian worshippers on the last Friday of the Muslim holy fasting month of Ramadan in the city’s worst disturbances since 2017.

Nightly unrest since then at the Al-Aqsa compound has left hundreds of Palestinians wounded, drawing international calls for de-escalation and sharp rebukes from across the Muslim world.

Diplomatic sources told AFP that Egypt and Qatar, who have mediated past Israeli-Hamas conflicts, were attempting to calm tensions.