Veena Malik admits she does not write her own tweets 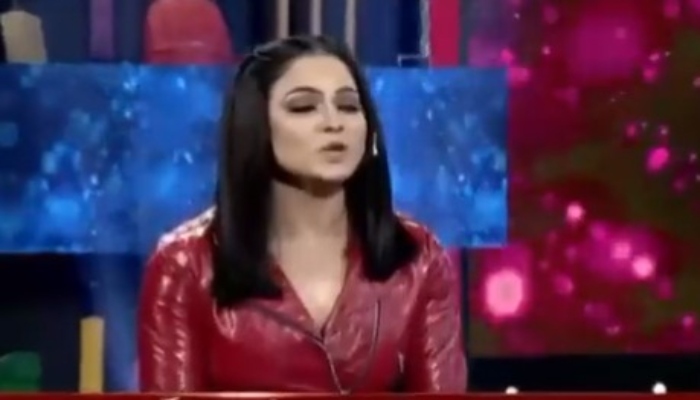 Pakistani actress Veena Malik has admitted that she does not pen her own tweets that often take aim at anti-PTI political personalities, most notably Maryam Nawaz.

In an interview on ARY News show Har Lamha Purjosh, the Pakistani actress (who recently announced a comeback) said spoke about her political views with the host of the show, Waseem Badami.

When the host read out a few tweets from Veena Malik’s account that contained harsh language, the actress laughed and said the words did reflect her thinking.

“Yes, they do reflect my thoughts. But it isn’t necessary they are my words too,” she said.

The host was intrigued. “Then whose words are they?” he asked.

“Keep guessing,” she said coyly. “Because I can’t speak or write Urdu this well,” she added, smiling.

When the host asked whether Veena Malik was the one tweeting, she responded “yes” with a bit of hesitancy. When he asked whether the words were her own or not, she said not necessarily all the time.

When Badami asked her further questions about her tweets on Justice Azmat Saeed Sheikh and the Hudaibiya Paper Mills case, Veena Malik was clueless.

In the later segment of the show, Veena Malik lashed out at Aurat March, saying that the movement was not going about the right way in propagating women’s rights or highlighting their causes. She also referred to infamous director Mir Khalilur Rehman, saying that he is a “modern day philosopher”.

“Aurat March is a sham. Khalilur Rehman Qamar sahab is a modern day philosopher and I don’t think she [Marvi Sirmed] should have used women’s rights to further her own agendas. If anyone wants to do anything for women in this country, there are many ways to do it. I am going to start an NGO for women and children soon.

Indian submarines’ unrequited quest for presence in the Arabian Sea