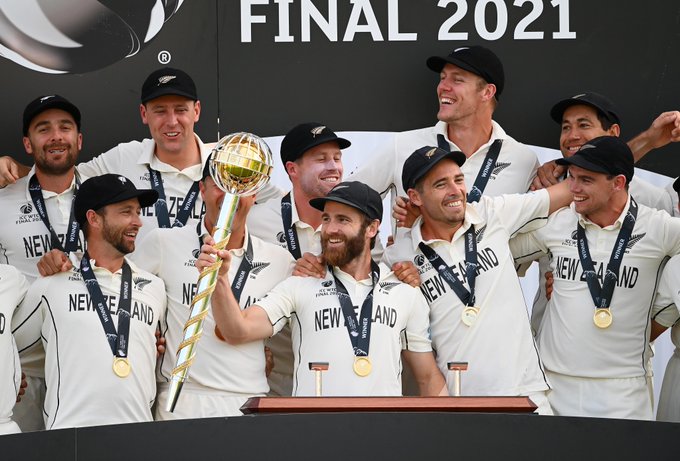 New Zealand captain Kane Williamson says the pain of losing two ICC World Cup Finals in the past makes their win at Southampton even more special.

Williamson was out in the middle when Ross Taylor hit the winning runs on Wednesday to confirm the Kiwis as the first-ever winners of the World Test Championship.

The New Zealand captain played in both of his country’s previous Men’s Cricket World Cup Finals, losing One Day International tournaments to Australia in 2015 and then to England in 2019.

And Williamson says going through those losses makes the victory over India at the Hampshire Bowl extra sweet.

“It’s a very special occasion and a fantastic feeling having been involved in a couple of Finals previously,” Williamson said.

“I suppose one was… well, the first one was one-sided, the second one was pretty interesting, and this feeling is a bit different to those, which is great. I know the guys will celebrate that.”

New Zealand completed their eight-wicket win in the final hour of the reserve day in Southampton, after a hard-fought Test match that saw ball dominate bat throughout.

“It was the pinnacle – being involved in the Final against a formidable side like India,” Williamson said.

“They certainly showed their quality and it was a lot of heart that allowed us to stay in the game for long periods.

“A lot of credit goes to the way our group adjusted and stayed in the battle, because it was a battle. No one with the bat got momentum at any point in time – the ball kept going past the outside edge and there were always opportunities.

“To have the sixth day as back-up due to weather was a good initiative and to see both teams have a real opportunity to win meant for a fantastic game,” Williamson added.

“It’s a proud moment in our history and a proud moment as a team to stick to what we do well and come away with the win, which is a really great feeling.”

The match was also the final Test of New Zealand wicketkeeper BJ Watling’s career. And his teammate Tim Southee heaped praise on the 35-year-old for his impact and influence on the side’s run to the World Test Championship title.

“BJ Watling sums up what this team means,” Southee said “We wanted to send him off with a win.

“He’s been a tremendous part of the side, he’s given this team everything he’s had, I couldn’t be happier for him.”

No justification to keep Pakistan in FATF grey list: FM