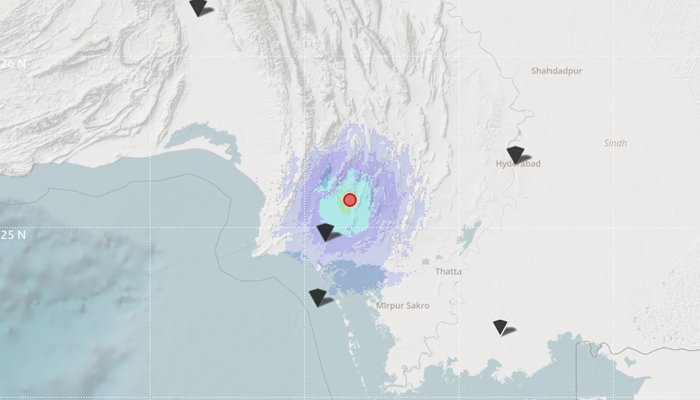 KARACHI: Earthquake tremors were felt in Karachi — the provincial capital of Sindh — on Wednesday, according to the Pakistan Meteorological Department (PMD).

Tremors were felt in Gulshan-e-Iqbal, Gulistan-e-Jauhar, Malir Cantt, Scheme 33, and I.I. Chundrigarh road, among other areas, per pmc.

Reports reveal that the quake was also felt in areas of Gulshan-e-Hadeed, Gadap Town, North Nazimabad, Keamari, and Federal B Area, while Dhabeji and Gharo of District Thatta were also affected.

PMD said that the frequency of the quake was 4.1 magnitude on the Richter scale, adding that it measured a depth of 15 kilometres. Tremors were felt in the city at 10:16pm, while its epicentre was 15 north of Defence Housing Authority (DHA), Karachi.

The tremors spread panic among locals, as evident from social media posts. However, no casualties or damages have so far been reported.

It should be recalled that in October, a strong earthquake hit different parts of Balochistan, killing at least 20 people and injuring more than 300 others, with the authorities saying that most of the deceased were children.

The quake affected Quetta, Sibi, Harnai, Pishin, Qila Saifullah, Chaman, Ziarat, and Zhob in Balochistan. The magnitude of the quake was measured at 5.9 on the Richter scale.

Pakistan turns down US invitation to Summit for Democracy

At least 20 die in Balochistan earthquake