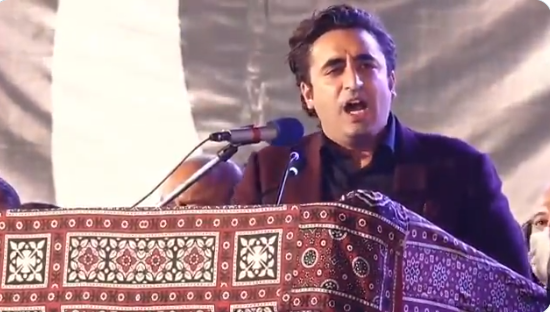 In a statement issued from the Media Cell Bilawal House, Bilawal said that the PPP was the only political platform that actively represented the will of the people, and even its critics would agree that its policies are aimed at empowering the most marginalized.

He added that the PPP has the potential and vision to create jobs, and that the PPP had a proven track record for providing employment to the people and youth of the country. Any honest reading of history would show that the country has seen some of the most progressive economic and agricultural policies under PPP governments.

The incompetent PM on the other hand has a revolving door policy for this country’s financial advisers. What more could underscore the absolute lack of vision than the fact that the Finance Minister has been changed thrice, the Board of Investment chairman has been changed thrice, the Chairman FBR being changed four times, and theSecretary Trade being changed four times as well in this governments two and half years of power.

“No matter who the selected PM changes, the results will be the same because the PM does not have the vision or the ambition to do anything but serve his crony capitalists and his benefactors.”

The situation in Pakistan will remain bleak as long as we are ruled by a PM and government that announces and trumpets a policy one night, only to change its mind overnight and rejects it in a cabinet meeting the next day, he added.

The short rule of the PM has badly exposed his ineptitude and incapability of governing a country, and the masses know that all the talk of Tabdeeli (Change) was just an eye wash for Imran Khan to play out his megalomaniacal fantasies , the Chairman PPP said.

He said 33 months and 11 days into this governments term, the country was still waiting for the selected Prime Minister to fulfill his commitment of fixing Pakistans problems in 90 days.

It is patently clear that the remaining 813 days will be marked by the same incompetency and misrule that is synonymous with the government.