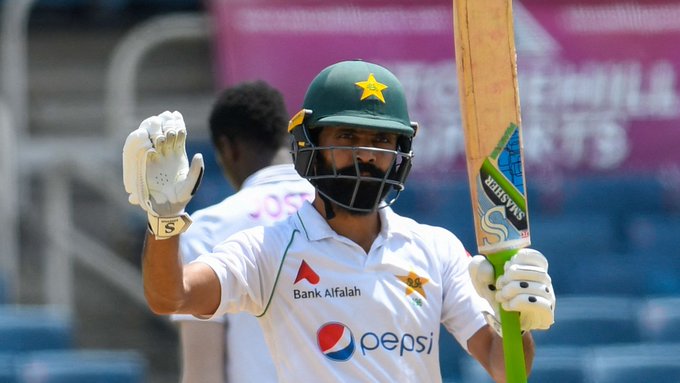 Fawad Alam continued his meteoric Test resurgence to put Pakistan on top on day three of the second match against West Indies at Sabina Park.

Only 23 years old when he first broke into the side, Alam was marked greatness when he made a second innings Test century on debut in 2009 against Sri Lanka. He would play three Tests that year but had to wait until August 2020 for his fourth.

Since his return to the side, Alam has been quickly making up for lost time, with four centuries since December. Remarkably, his five Test tons to date have come against five different opponents in five different countries.

“I’m very happy right now,” he said at stumps on day three. “Whenever you score a century for your country you feel proud.

“I make things very simple,” he said, reflecting on his career resurgence. “I obey my Dad’s advice. He always motivates me, always telling me ‘you perform and your time will come one day’.”

Much like his Test career to date, the left-hander’s century against the West Indies came in two segments, with the 35-year-old again left to make up for lost time.

Coming out to bat with Pakistan in trouble at 2/3 on day one, Alam rebuilt the innings with captain Babar Azam. The duo put on a 158-run stand, with the skipper reaching his half-century off 96 balls and his partner off 101. The partnership was brought to an end when Alam retired hurt on 76, limping badly as energy-sapping conditions took their toll.

On day three – after the entirety of day two and the morning session of day three were scuppered – Alam returned to the crease following the dismissal of Faheem (26). With Pakistan 218/5 and needing to force the initiative, Alam picked up a boundary through point off just the second ball he faced.

The need for quick runs only intensified after Jason Holder (2/46) accounted for Mohammad Rizwan (31) and Nauman Ali (0) with consecutive deliveries. With four boundaries across three overs from Holder, Alam raced to 99. He would be parked there for the next two and a half overs as fate conspired to starve him of the strike. With a pull off Kyle Myers (0/34) he finally raised his ton, kissing the turf in celebration.

A mix-up with Hasan Ali (9) cost the tailender his wicket but Alam found a reliable partner in Afridi (19), with their ninth-wicket stand of 35 taking Pakistan past 300 before Babar called them in early in the final session.

Hopes of a victory still looked slim for Pakistan at that point only for Afridi to ignite them in a brilliant new ball spell, trapping Kieran Powell (5) in front before castling Kraigg Brathwaite (4) with a beautiful inswinger. The hosts suffered another blow in the 14th over when Faheem bowled Roston Chase for 10 to leave West Indies at 34/3.

Nkrumah Bonner (18*) and nightwatchman Alzarri Joseph (0*) will look to pick up the pieces on day four.