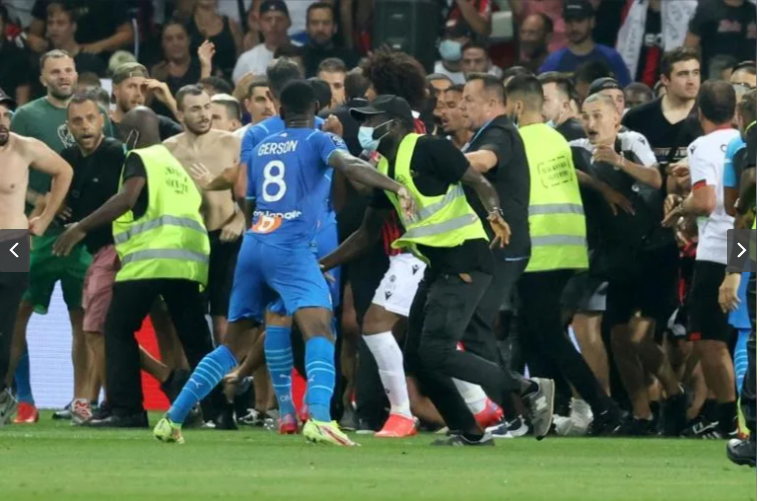 The French Ligue 1 game between Nice and Marseille was abandoned Sunday when fans of the home side invaded the pitch and angrily confronted opposing player Dimitri Payet, who had thrown a bottle lobbed at him back into the crowd, before an ugly brawl broke out involving players and spectators.

Marseille eventually refused to restart the match with club officials claiming their players’ safety could not be guaranteed.

Trouble at the Allianz Riviera Stadium flared in the 75th minute when Marseille star Payet, who had been targeted by plastic bottles every time he took a corner, launched one back at the Nice fans.

Angry home supporters then clambered onto the pitch, threatening Payet.

In the melee, Marseille’s Alvaro Gonzalez and Matteo Guendouzi ran towards the end of the ground to face down the fans.

A security cordon of stewards, dressed in yellow vests, tried to stem the pitch invasion before a brawl broke out between players of the two teams, supporters and staff.

Marseille coach Jorge Sampaoli was seen being restrained by his staff and players.

The referee then led both teams off to the safety of the dressing room.

Eighty minutes after the game was suspended, Nice, who were leading through a Kasper Dolberg goal, said they wanted to restart.

Marseille, however, wanted the match halted for good.

“The decision was taken by the authorities to resume the match, but Marseille do not want to,” Nice president Jean-Pierre Rivere told broadcaster Prime Video.

According to a source, the referee Benoit Bastien was also opposed to a restart.

Eventually, the match was abandoned when the Marseille team refused to continue.

“The referee was with us, he confirmed to Jorge Sampaoli and me that safety was not guaranteed and decided to stop the game.”

Marseille’s opening 3-2 win at Montpellier two weeks ago was also held up when fans pelted the pitch with bottles.

That clash at Montpellier’s Stade Mosson was halted in the 89th minute after Marseille substitute Valentin Rongier was hit on the head.

Earlier Sunday, Lyon coach Peter Bosz said his side made mistakes like an “under-12s” team as they let a two-goal lead slip to draw 3-3 at home to French Ligue 1 new boys Clermont.

The visitors’ Kosovo winger Elbasan Rashani scored twice in the final 10 minutes after Bosz’s outfit had led 3-1 at half-time.

Lyon were jeered off the field by their supporters at full-time as Dutchman Bosz, who joined in the close season after a spell at Bayer Leverkusen, remains without a win in three games this term.

“I saw things you don’t even see at under-12s level. It’s a problem of confidence,” said Bosz.

Moussa Dembele, 25, who spent the latter part of last season on-loan at Atletico Madrid, got the 34,000 crowd going when he opened his account for the new campaign after just five minutes from the penalty spot after he was fouled by Johan Gastien.

Seven minutes later, the outfit from the Auvergne were all-square as Lyon defender Sinaly Diomande put through his own goal.

Bosz’s side took control again after 20 minutes with Dembele claiming his second after VAR was used to check for an offside.

With 10 minutes to play, Clermont, in their first season in the French top flight, cut the deficit as Rashani claimed his maiden goal since joining the club from Erzurumspor in July.

The comeback was complete afer 91 minutes as Rashani, born in Sweden, headed home from a cross by Gastien.

On Saturday, champions Lille drew 1-1 with Saint-Etienne and like Lyon are still without a victory.

On Friday, Paris Saint-Germain made it three wins out of three as Kylian Mbappe and Angel di Maria both netted in a 4-2 win at Brest.

Lionel Messi and Neymar missed the fixture with the Argentina star set to make his PSG debut at Reims next Sunday.