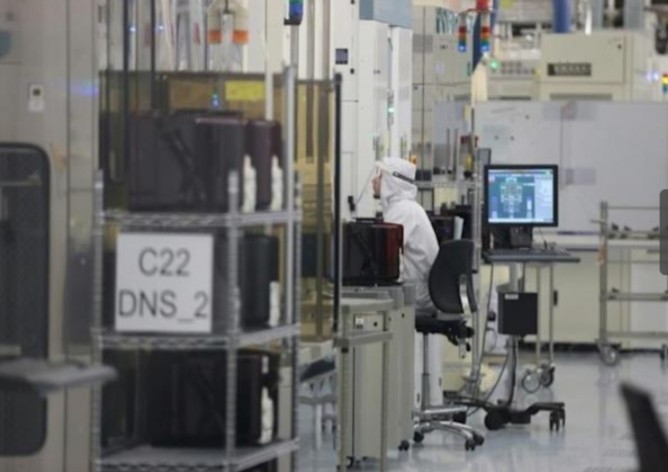 The EU launches a plan Tuesday to raise tens of billions of euros to boost semiconductor production in Europe and end the bloc’s digital dependence on Asia.

The production of semiconductors, also known as chips, has become a strategic priority in Europe as well as the United States, after the shock of the pandemic choked off supply, bringing factories to a standstill and emptying stores of products.

The manufacturing of chips overwhelmingly takes place in Taiwan, China and South Korea and the European Union’s 27 member states want factories and companies inside the bloc to take on a bigger role.

Thierry Breton, the EU’s industry commissioner, on Tuesday will press Europeans to be as ambitious as possible and match similar plans in the United States, where the Biden administration is asking Congress to approve $52 billion.

Touring the IMEC chip research facility in Belgium on Monday, Breton boasted that the plan “will position Europe as an industry leader but also give us complete control of our semiconductor supply chains”.

“The EU will equip itself with the means to guarantee its security of supply, as the United States does for example,” he said, in a separate briefing to reporters.

“Europe will remain an open continent, but on its own terms,” he said, referring to a “paradigm shift” in the European approach to highly strategic supplies such as semiconductors.

If approved, the EU plans could generate a total of 42 billion euros ($48 billion) via existing EU budget money as well as by loosening existing rules on public subsidy from member states.

The main goal of the chip crusade will be to double Europe’s semiconductor capacity from 10 percent of the world’s value today to 20 percent by 2030.

The proposal will need the approval of the EU member states and European Parliament, where opinions will vary between the ambitions of industrial heavyweights such as Germany, France and Italy and those of smaller states that are worried about closing off valuable supply chains with Asia.

Some member states, led by the Netherlands and Nordic nations, will also resist any plan to widen the scope for state aid, with the commission set to make it easier for EU governments to pump money to chip-makers.

“We don’t want to end up in a position with a huge US company getting a bunch of EU money to open a factory in one big member state,” an EU diplomat said.

But the pressure on Europe to move quickly is acute, with South Korea also promising huge sums of subsidies to ramp up its chip business.

These payouts will likely dwarf whatever Europe has on offer. In Taiwan, the chip juggernaut TSMC plans to spend between $40 billion and $44 billion just over the coming 12 months on new plants.

With the new priority, indications are that manufacturers are shopping around for the best deal as they seek locations for new factories.

Intel, the US-based chip-maker, is on the verge of announcing a major investment in Europe, with big players Germany, France and Italy possible destinations.

CEO Pat Gelsinger told German media his decision not only depended on questions of suitable locations and staffing “but also on the available subsidies to build the factories.”

“We have also obtained considerable subsidies for our factories in Asia,” Gelsinger said.

US seizes $3.6 bn of stolen bitcoin in record haul

US, EU call for ‘full commitment’ from WHO to prevent sexual violence