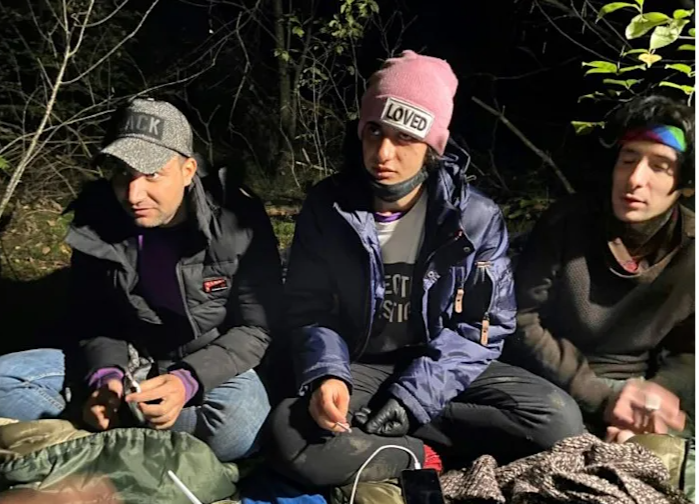 His hands trembling with fear and fatigue, 19-year-old Iraqi Hadi prepared to spend a cold night in the forest in southeast Poland just after crossing the EU border from Belarus.

Speaking to AFP on Thursday a few kilometres into Poland, the teenager said he was making the journey for a third time after twice being sent back into Belarus by Polish border guards in recent weeks.

One of thousands of migrants — mostly from the Middle East — who have crossed or tried to cross the 400-kilometre (249-mile) border since August, Hadi said the guards told him not come back.

On Thursday, EU Home Affairs Commissioner Ylva Johansson was due in Warsaw to discuss the issue with Poland’s interior minister.

“They pushed us back and said: ‘Don’t come back here. Go back to Belarus!” said Hadi, who wore a pink hat with the word “LOVED” on it.

“I am tired and worried,” he said, shivering in his sleeping bag on the forest floor in an area surrounded by shrubs to hide from border guards.

Hadi, who refused to give his surname for fear of reprisal, spoke alongside two Iraqi friends, Ali and Ameer, who made the journey with him.

Ali wore a multi-coloured bandana and had tattoos on his neck, Ameer had on a glittery baseball cap.

All three are from Iraq’s hard-pressed LGBTQ community, saying they fled their homeland because they faced harassment after protesting in favour of gay rights there.

“A few months after the protests, they started to threaten us,” Hadi said, adding that he had “lived for a whole year in hiding” in Iraq.

The EU suspects Belarus is masterminding the influx into Poland as a form of retaliation against EU sanctions but the regime has put the blame on the West.

Poland has sent thousands of troops to the border, built a razor-wire fence and implemented a three-month state of emergency along the border area that bans journalists and charity workers.

NGOs including Amnesty International have accused the government of preventing the migrants from making asylum claims and forcing them back across the border in so-called “pushbacks”.

Asked about the pushbacks last week, Deputy Interior Minister Maciej Wasik said only that Poland was using “all legal means” to protect its border.

Stuck between Polish guards on one side and Belarusians on the other, many migrants have found themselves mired in a tragic back-and-forth through forests.

Five have died so far.

The Polish government is also planning to change legislation to make it easier for border officials to ignore asylum claims and send migrants back.

She has also called for “transparency in protecting the external borders of the EU” and said it was important that EU laws should be respected.

In the pitch-dark forest, the young Iraqis said they had successfully avoided border guards and transmitted their location to NGOs by phone.

They were found by representatives of the human rights group Homo Faber after a long drive on a bumpy forest road and a walk by torchlight.

“International protection!” Anna Dabrowska and Piotr Skrzypczak shouted as they looked for the migrants on foot carrying food and clothes, pausing to check the location on their phones.

After finding the three, Dabrowska’s first words were: “We’re not from police. Don’t worry!”

Skrzypczak told them: “You are in Poland!”

The campaigners also brought legal assistance, offering to make an application directly to the European Court of Human Rights on the migrants’ behalf in order to be able to stay in Poland.

Border guards said this week that more than 8,200 migrants had been prevented from crossing into Poland since the beginning of August and 1,200 had managed to cross and were in detention.

Asked how many she had been able to assist, Dabrowska said it was “difficult to give a number since often it is the same people who are trying again and again to cross over”.

“These people are sent back to Belarus and they try to get back into Poland again and we see them a second time, a third time, a fourth time…”