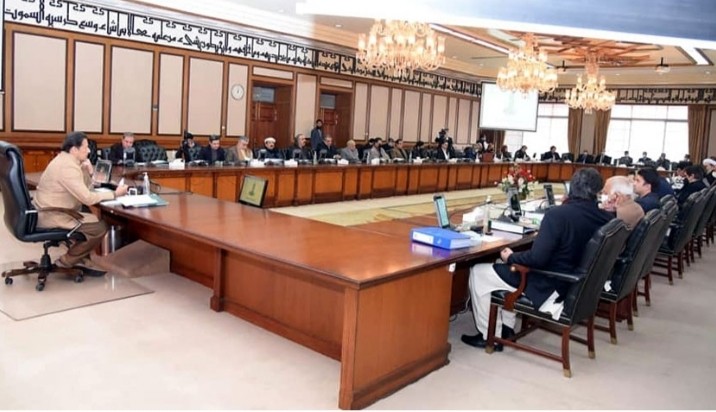 The federal cabinet has approved the first ever comprehensive and consensus National Security Policy of Pakistan with special emphasis on economic strategy.

Briefing media in the federal capital on Tuesday, about the decisions taken by the federal cabinet, which met in Islamabad today with Prime Minister Imran Khan, National Security Adviser Dr Moeed Yusuf said it is an umbrella document, which entails human security as well as population, health, climate, water, food, energy, and gender security. He said education has been clubbed with the economy.

Dr Moeed Yusuf said the process of formulating the NSP had begun in 2014 and this document has been approved after getting input from all civil and military institutions, including the private sector. He said Prime Minister Imran Khan will launch the public version of NSP in coming days.

Briefing about other decisions of the cabinet, Minister for Information and Broadcasting Chaudhry Fawad Hussain said the cabinet directed the Punjab Government to launch a massive action against smuggling and hoarding of Urea to end artificial shortage of the commodity. He expressed the belief that situation will improve in next 48 hours.

The Minister said the cabinet was briefed about the production of Urea in the country. He said the government provided gas to the fertilizer manufacturing plants to fulfill requirements of Urea and other fertilizers in the country. He said Urea is being sold at the rate of 1700 to 1900 rupees per bag, whereas its price in the international market is 10,000 rupees, which prompted profiteers to indulge in hoarding and smuggling to make money. He said we have sufficient production and stock of Urea at affordable rates.

Chaudhry Fawad Hussain said the cabinet also approved publication of tax directory of parliamentarians for the year 2019 to ensure transparency as per vision of Prime Minister Imran Khan. He said Ex-post facto sanction was granted to a water project for the people of Gwadar. He said the cabinet approved sending of Covid related medical equipment worth 23 million rupees to Cuba.

The Minister said the meeting approved constitution of a Joint Investigation Team to probe the murder case of Nazim Jokhiyo.

Shami’s ‘line and length’ bowls India into position of strength