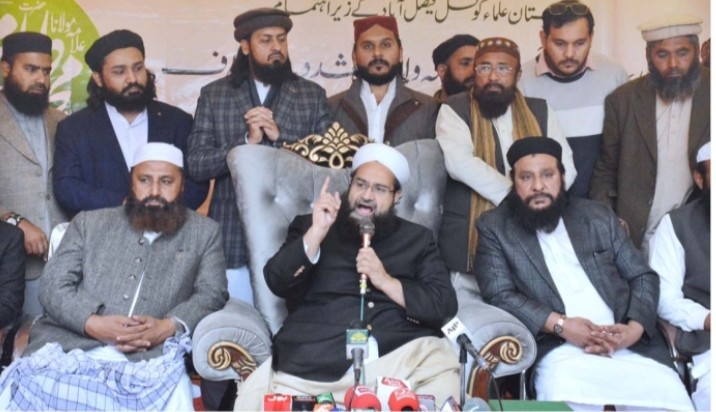 FAISALABAD, Dec 26 :Special Representative to Prime Minister on Interfaith Harmony and Middle East Hafiz Tahir Mehmood Ashrafi has said that Islam is a religion of peace and it does not allow insulting any religion or permit others to utter irreverent and profane remarks against Holy Prophet Hazrat Muhammad (peace and blessings of Allah be upon him).

He was addressing Ulema-o-Mashaikh Convention at Canal Park Sammundri Road here on Sunday. He said that world knew that insulting any religion was not freedom of expression nor did Islam allow incidents like Sialkot. It is clear that blasphemy hurts the religious feelings and sentiments of the Muslims as Holy Prophet Hazrat Muhammad (peace and blessings of Allah be upon him) is dearer to the Muslims than their own lives and properties, he added.

He said that sporadic incidents of violence could not reflect the true picture of religious harmony in Pakistan. He strongly condemned the lynching of Sri Lankan national in Sialkot and said that government had further beefed up the security of minorities and foreign nationals.

He said that Islam did not allow taking law into hands or burning property of anyone or harming him on any reason because this practice was totally against Shariat rather Islam gave a legal procedure to take any accused to task though he committed blasphemy or any other offence.

He appealed the Ulema to bring true picture of Islam so that Sialkot like incidents could not happen in future again.
He also appealed to the Chief Justice of Pakistan to decide blasphemy cases on urgent basis so that the accused could get punishment of their wrong deeds.

He said that OIC meeting held in Islamabad took bold steps on Afghan issue. Saudi Arabia has made great strides on this issue while rest of the Islamic countries has also assured their full cooperation in this regard. It is also a great achievement that the whole world is now recognizing our position on the issue of Afghanistan, he added.

Hafiz Tahir Ashrafi said, “Muslims are like one body. The whole body feels pain if any part of it gets hurts. Therefore, we should understand pain and troubles of others and try optimum to resolve it”.

“Islam does not prevent women from getting education but it declares education mandatory for men as well as women. In this regard maximum legislation has also been enacted so that the female community could play its dynamic role in national and social development,” he added.