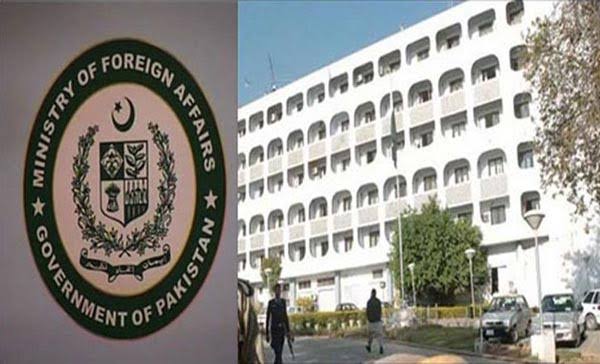 Pakistan on Monday called upon the government of India to take immediate steps to halt the illegal construction of a temple at the place of Babri Masjid, reconstruct the Babri Masjid at its original site and ensure the safety and protection of mosques and Islamic holy sites in India.

The Foreign Office in a statement said today marked another year since the tragic demolition of the historic Babri Masjid by BJP-RSS zealots.

This day was a stark reminder of the hysteria and hatred exhibited in India against Muslims and their heritage 29 years ago with state complicity.

The cruelty and frenzy with which the centuries-old Mosque in Ayodhya was desecrated and demolished belied all tenets of international norms and constituted grave violation of religious rights of the minorities.

The heart-wrenching scenes of the razing of the Babri Mosque were still fresh not only in the minds of Muslims across the globe but also in the collective conscience of the international community.

The defective Indian Supreme Court judgment of November 2019 and the subsequent shameless acquittal of criminals, mainly BJP leaders who had presided over the demolition in public glare, was testimony to India’s fast descent into majoritarianism and Hindutva extremism.

Appointing former Chief Justice Ranjan Gogoi, who led the bench writing the flawed verdict, as nominated member of Parliament within four months of his retirement, clearly indicated that the process was influenced by the ruling BJP-RSS dispensation for the advancement of its Hindutva agenda.

Unfortunately, this remained the reality of today’s India where sacrilege of religious places and senseless attacks against minorities with state complicity had become a norm.

The religious zealotry that was witnessed 29 years ago had only aggravated in ferocity and viciousness. Anti-Muslim pogroms in Gujarat in 2002 and in Delhi in February 2020, the discriminatory Citizenship Amendment Act (CAA) and the National Register of Citizens (NRC) aimed at disenfranchising Muslims, violence against Muslims on the false pretexts of cow vigilantism, so-called ‘Love-Jihad’ and many such flimsy excuses, the recent brutal eviction of Muslims in Assam, the vandalization of mosques and Muslim properties in Tripura, the continued disruption of Friday prayers in Gurgaon were vivid pointers to growing religious intolerance and fanaticism in India.

The harrowing impunity with which minorities especially Muslims were being persecuted, demonized and marginalized in India was deplorable.

India’s attention was also invited to the Organization of Islamic Cooperation (OIC)’s numerous resolutions, condemning the despicable act of demolishing the historic Mosque, and OIC’s 47th Session of Council of Foreign Ministers (CFM) calling on the Indian Government to implement its commitment to reconstruct the Babri mosque on its original site and to punish those responsible for its demolition. Furthermore, meaningful steps must be taken to ensure safety, security and religious freedom for all minorities especially Muslims in India.

The international community, United Nations and relevant international organizations must also vociferously impress upon India to abide by its obligations under international law to protect Muslim places of worship from Hindutva extremism and ensure effective safety of all minorities and their holy sites, the statement concluded.

Responsible for Sialkot incident will be brought to justice: Interior Minister