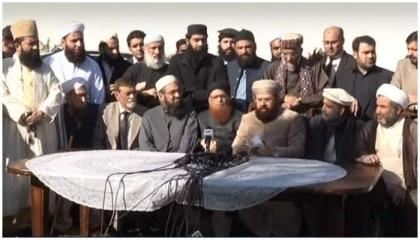 ISLAMABAD, Dec 7 : Special Representative to the Prime Minister (SAPM) on Interfaith Harmony and Middle East, Muhammad Tahir Mehmood Ashrafi along with delegation of ulema from different schools of thought on Tuesday visited Sri Lankan High Commission and conveyed their condolences to express solidarity with the people of Sri Lanka over the tragic Sialkot incident.

Speaking on the occasion, renowned religious scholar Mufti Taqi Usmani said the delegation conveyed their heartfelt sorrow over the barbaric incident to the Sri Lankan High Commissioner, victim’s family and the people of Sri Lanka.

“Pakistan and Sri Lanka are two friendly countries and this tragic incident is not only painful for Sri Lanka but also for all of us as a shared grief” he said.

Mufti Usmani said that due punishment would be given to the culprits involved in this heinous act of barbarism.

He expressed the hope that the government of Pakistan would also compensate the victim’s family.

On the occasion, Hafiz Tahir Mehmood Ashrafi said the followers of all religions and religious scholars in the country strongly condemned the lynching of the Sri Lankan factory manager.

He said all leaders of religious organisations expressed grief and condolence with the Sri Lankan High Commissioner and people of Sri Lanka.

“Those involved in the incident had not only brought bad name to the religion but the country as well,” he added.

Other Ulema and religious scholars were of the view that this was inhuman act and no one could support or justify it.

They also demanded of the government to give compensation to the victim’s family, adding that every Pakistani was in pain and shared these hours of grief with Sri Lankan brothers.

“However, we are happy that government of Pakistan has taken stringent action against the culprits involved in the incident to punish them,” the ambassador said. He said that already a number of culprits had been rounded up and were behind the bars.

“This incident will not affect bilateral ties between the two friendly countries,” he said and pointed that the relationship between the two countries dated back to the independence of Sri Lanka and Pakistan.

The high commissioner said, “We are very confident that this particular incident will be handled by the government and justice will be provided to the victim’s family and children.”

He thanked the delegation for expressing condolence with people of Sri Lanka and the victim’s family.

The tragic incident happened on Friday where some factory workers attacked the Sri Lankan manager, and killed him. Prime Minister, Imran Khan took a serious note of the tragedy and directed that no person responsible for the mauling be spared.

The police have arrested over 130 people and identified the main perpetrators, who will be tried under the Anti Terrorism Act.