Pakistan fight hard to record 19th T20I win in 2021, seventh on the trot against the West Indies 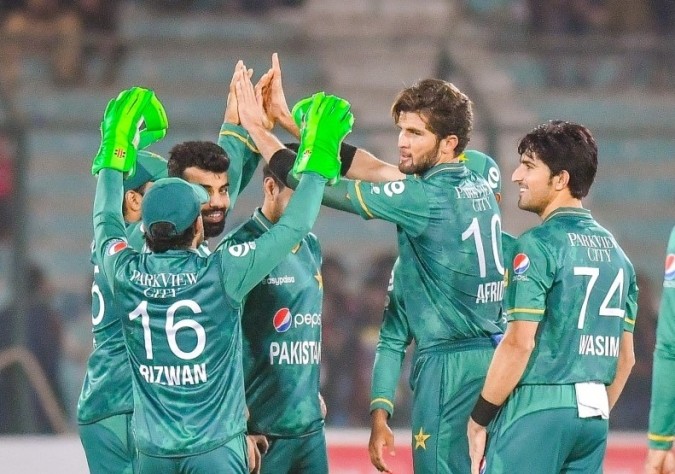 Karachi, 14 December 2021: Pakistan overcame their batting blip as well as a maiden half-century by Brandon King and a Romario Shepherd cameo to clinch their seventh successive victory over the West Indies and 19th overall in this calendar year when they won the second Twenty20 International by nine runs that gave them 2-0 unassailable lead at the National Stadium on Tuesday.

Pakistan slipped from 86 for two in 11 overs to 141 for seven in 18 overs before a late flurry by Shadab Khan (28 not out of 12 balls) helped them reach 172 for eight after they had elected to bat first.

King then struck a career-best 67 in his 13th match and Shepherd scored a 19-ball 35 not out as the two-time former T20 world champions were bowled for 163 in 20 overs after being 85 for two in the 11th over at one stage. King struck six fours and three sixes in a 43-ball 67 and added 54 runs for the third wicket with Nicholas Pooran (26), while Shepherd struck two fours and two sixes.

Fast bowler Shaheen Shah Afrdi took three wickets in an over to finish with three for 26, while Mohammad Wasim Jnr followed up his Monday’s figures of four for 40 with two for 39, Mohammad Nawaz bagged two for 36 and Haris Rauf scooped two for 40. Shadab Khan remained wicketless, but conceded only 22 runs in his four overs.

While this was Pakistan’s seventh successive victory over the West Indies since the 2 April 2017 T20I at the Queen’s Park Oval, this was also the 2009 T20 world champions’ 19th victory in this calendar year. This includes their 10th win in 11 matches since the 24 October 2021 victory over India in Dubai by 10 wickets.

However, the victory tested Pakistan’s mental toughness as well as abilities to perform with the bat and the ball in pressure situations.

Shadab Khan slapped three sixes and a four as Pakistan added 31 runs off the last 12 balls to reach 171 for eight after they seemed to have lot the plot by slipping to 141 for seven in 18 overs.

Babar Azam suffered his second successive failure when he was run-out for seven, which will see him drop in the ICC rankings when they are announced on Wednesday, before Fakhar Zaman was foxed by Akeal Hosain as Pakistan were reduced to 38 for two.

Mohammad Rizwan (38) and Haider Ali (31) stitched a 48-run third wicket partnership to prepare the side for the assault, but their departures followed by the dismissals of Mohammad Nawaz (1) and Asif Ali (9) limited Pakistan to 124 for six, which became 141 for seven with the departure of Iftikhar Ahmed (32).

Pakistan were 73 for two after the halfway stage, reached 113 for five before adding 59 runs from the last five overs. The West Indies matched Pakistan until their 15 overs when they reached 71 for two after 10 overs and were 112 for four after 15 overs before their efforts were derailed in the 17th over when Shaheen picked up three wickets.

Player of the Match – Shadab Khan

Seven truckloads of relief goods handed over to Afghanistan