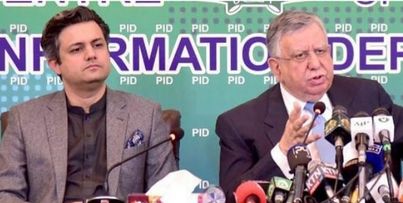 ISLAMABAD, Nov 22 (APP):Adviser to the Prime Minister on Finance and Revenue, Shaukat Tarin on Monday informed that an agreement between Pakistan and International Monetary Funds (IMF) under Extended Fund Facility (EFF) worth US $1.059 billion had been finalized.

The adviser said that Pakistan and IMF had reached the US$1.059 billion agreement up to staff level and now the agreement was in the executive board which would be approved by the board by January 12 , 2022.

He said this while addressing to a press conference along with Minister for Energy Muhammad Hammad Azhar and Chairman Federal Board of Revenue (FBR) Dr Muhammad Ashfaq Ahmed.

Shaukat Tarin said that after the signing of this agreement between Pakistan and the IMF, the door of economic cooperation would be opened for Pakistan in various international economic institutions including the World Bank and the Asian Development Bank.

As a result, there was potential for further improvement in the country’s economy in the future, he added.

He said that the conditions proposed by the IMF were Rs 700 billion in taxes but the government agreed to Rs 350 billion.

“We have saved fertilizers, food items and other things from taxes,” he said.
Replying to a question regarding Fiscal Consolidation, he said that along with savings in many places, the Public Sector Development Program (PSDP) would be reduced from Rs 900 billion to Rs 700 billion and some more steps would be taken.

“Apart from the agreement with the IMF, we have set a tax revenue target of 5.8 trillion,” he said.

The government is optimistic about the tax revenue target as “we are still seeing a 36 percent increase in tax revenue over the previous year,” he said.

Shaukat Tarin said that after this program, the government would adjust the fiscal discipline, including the State Bank of Pakistan Act.

He said that the government had agreed on some issues with the IMF in the previous review and some further discussions were held on it but due to the hard work of our economic team, this agreement was made possible.

He said that to maintain energy prices, fiscal discipline and tax revenue collection were very important for the government which was working on it.

He said that inflation was a global issue and it was due to the disruption of the global supply chain.

He said that the IMF had agreed on public finance reforms, tax reforms and simplification.
The IMF had also agreed to provide targeted subsidies, as well as to continue reforms, he added.

Both the packages would continue as at Rs 12.96 per unit, he said.
Hammad said prices of essential commodities witnessed sharp increases across the globe due to COVID-19 pandemic.

He said the entire negotiation team led by the Adviser on Finance Shaukat Tarin deserved appreciation.
He said the agreement would bring further stability in the country’s economy.