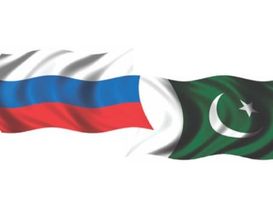 ISLAMABAD, Nov 22 (APP): Pakistan and Russia Monday agreed to further broaden their bilateral engagement on issues related to combatting international terrorism and other challenges to security, reaffirming their commitment to continue dialogue on countering the financing of terrorism.

During the 9th Meeting of the Russia-Pakistan Joint Working Group on Combatting International Terrorism and Other Challenges to Security, both the countries also reaffirmed their willingness to work closely with each other on issues of common concern at key international platforms like the United Nations and regional bodies like the SCO.

The meeting took place in Moscow with the participation of representatives of competent authorities of the two states.

During the meeting, the sides exchanged ideas and discussed a broad range of issues related to global fight against terrorism and extremism, including existing challenges as well as new and emerging threats to international and regional peace and security.

Russia and Pakistan acknowledged and appreciated each other’s efforts in countering international terrorism, underscored the need for greater collaboration between the two countries on addressing the challenges to security.

The two countries renewed their commitment to counter the spread of terrorist propaganda in the information space, particularly on the Internet, and the phenomenon of foreign terrorist fighters.

They highlighted that the spread of terrorist mindset and ideologies and emergence of new forms of terrorism posed a grave challenge.

As part of this strategic dialogue Russia and Pakistan conducted a thorough exchange of assessments of global and regional terrorist threats, particularly in Afghanistan, the Middle East and North Africa, and Central and South Asia.

The next meeting of the Working Group will be held in 2022.