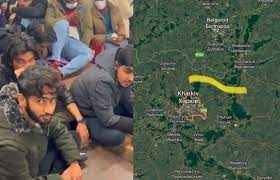 Pakistan’s Ukraine Ambassador Dr Noel I Khokhar confirmed approximately 1,500 Pakistanis including 500 students are stuck in war-torn Ukraine, he says they are safely evacuated to safe zones. Sources say on Thursday.

Dr Noel Israel Khokha, said “all Pakistanis in Ukraine are safe and they are told to move to safe locations. The envoy said that they will make arrangements for the evacuation of Pakistanis after moving them to safer places”.

“Overall 15,000 Pakistanis are present in Ukraine including 500 students. We are in touch with all Pakistanis. Many of the nationals have already departed from the country following our advice and a few students are left in Ukraine. They will be evacuated soon.”

A message posted by Pakistan Embassy in Ukraine read, “The Airspace of Ukraine is closed. The Embassy is in touch with the students who couldn’t leave according to the advice given to them earlier. They have been asked to go to Ternopol. Where arrangements for their evacuation will be made as situation allow”

As the war outbreak and at least 1500 people stuck in the war thorn country many Pakistanis are worried and panicking, sending out requests on social media to send help and evacuate them from the country.

However our Prime minister Imran Khan is still in Moscow as far as anyone knows , he arrived on the 23rd of February to Russia for a meeting with The Russian leader Putin, however he was supposed to depart last night, no word of his arrival yet and Pakistani citizens are still trapped asking for help.

Opposition politician Maryam Nawaz has taken notice of the issue

Is there anyone listening to the entreaties of hundreds of Pakistani students stranded in Ukraine waiting to be evacuated ?

While our prime minister is still in Russia, citizens and civilians still trapped and in danger stuck as the Ukrainian government closed their air space. People all over are worried what will happen next.