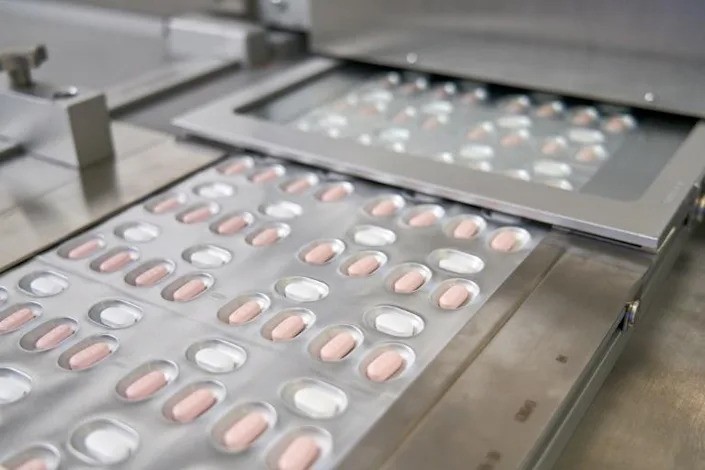 Pfizer said Tuesday that clinical trials confirmed its Covid pill — a new type of treatment that should withstand the mutations seen with the Omicron variant — drastically reduced hospitalizations and deaths among at-risk people by almost 90 percent.

The announcement, which was praised by US President Joe Biden, came as a real-world study from South Africa showed two doses of the Pfizer-BioNTech vaccine was 70 percent effective in stopping severe illness from the new strain.

The sustained vaccine protection was called encouraging by the authors of the research, though it represents a drop compared to earlier variants.

Data for the new pill came from more than 2,200 volunteers, and backed up preliminary findings announced last month.

The American drugmaker said its treatment, which is called Paxlovid and has not yet been authorized by any country, also held up against the Omicron variant in lab testing.

“I am encouraged by the promising data released by Pfizer today, showing that its antiviral pill is effective at reducing the risk of severe illness in people infected with Covid-19,” said Biden.

“This news provides another potentially powerful tool in our fight against the virus, including the Omicron variant.”

The US has ordered 10 million courses of the medicine, ahead of potential authorization by the Food and Drug Administration, which Pfizer CEO Albert Bourla said could happen this month.

The trial showed that the pill reduced the need for hospitalization in high-risk adults with Covid-19 by 89 percent if the treatment was given within three days of symptom onset and by 88 percent if given within five days.

Overall, there were 12 deaths in the placebo group, and none in the drug group.

Side effects occurred in about a quarter of people in both groups, and were mostly mild.

Paxlovid is a combination of two drugs — nirmatrelvir, a new experimental medicine, and ritonavir, an existing antiviral used against HIV, both taken over five days.

Because it does not target the fast-mutating spike proteins that stud the surface of the coronavirus, it should be more variant-proof than synthetic antibody treatments, as well as antibodies evoked by most types of Covid vaccine.

Another Covid pill, Merck’s molnupiravir, has already been authorized in Britain. A US panel of experts narrowly voted in favor of the Merck pill two weeks ago, but FDA authorization is still awaited.

Final study results showed molnupiravir reduced hospitalizations and deaths by a modest 30 percent, and there were also safety concerns over how it actually works, which is different from the Pfizer pill.

Merck itself recommended against molnupiravir’s use in pregnant women after animal studies showed harm to fetuses.

The news comes as the heavily-mutated Omicron variant is spreading rapidly around the world, with the World Health Organization saying it is “probably” present in most countries.

Even if early data suggesting that the variant causes milder illness in most people is confirmed, its increased transmissibility and ability to overcome prior immunity may negate this advantage, by infecting higher numbers of people.

Many countries have stepped up their booster shot campaigns in a bid to restore vaccine efficacy.

The latest research out of South Africa found that two doses of the Pfizer-BioNTech vaccine still offered good protection against serious illness of 70 percent, though this was reduced from 93 percent during the country’s Delta wave.

The study was based on the results of 78,000 PCR tests taken in South Africa between November 15 and December 7.

It also found two doses were 33 percent effective against infection — a result that aligns with early research from Britain, which experts said underscored the case for a third dose.

The British research found a third dose of Pfizer — either after two earlier doses of Pfizer or two of AstraZeneca — brought efficacy against infection back up to 70-75 percent.

The South African research further confirmed reinfection risk is higher with Omicron, and a lower percentage of people infected with the new variant were hospitalized when compared to the country’s first wave, after adjusting for vaccine status.