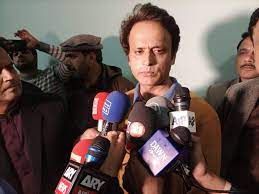 ISLAMABAD, Dec 5 : Prime Minister Imran Khan saluted the moral courage and bravery of Malik Adnan who tried his utmost to shelter and save Priyantha Diyawadana from the vigilante mob in Sialkot, endangering his own life by physically trying to shield the victim.

In recognition of demonstrating exemplary bravery, in the midst of a violent mob, the Prime Minister announced Tamgha i Shujaat for Malik Adnan.

In a tweet on social media platform Twitter on Sunday, he said, “On behalf of the nation I want to salute moral courage & bravery of Malik Adnan who tried his utmost to shelter & save Priyantha Diyawadana from the vigilante mob in Sialkot, endangering his own life by physically trying to shield victim. We will award him Tamgha i Shujaat.”

Talking to pmc, Malik Adnan said he was working in the sports factory for the last 16 years while the late Sri Lankan manager was working there for seven years.

He thanked Prime Minister Imran Khan for announcing Tamgha i Shujaat for him and said this step will encourage other people to help persons in distress.

He said such incidents of terrorism should be stopped, adding nobody has the right to take the law into their hands.

Talking about the incident, he said he received a call that Priyantha Diyawadana was attacked. He went out of his office and tried to save the Sri Lankan manager but as a huge number of people had gathered to attack him, he could not save him.

The Sri Lankan manager could not read and write Urdu and had removed a poster for cleaning a wall, he added.