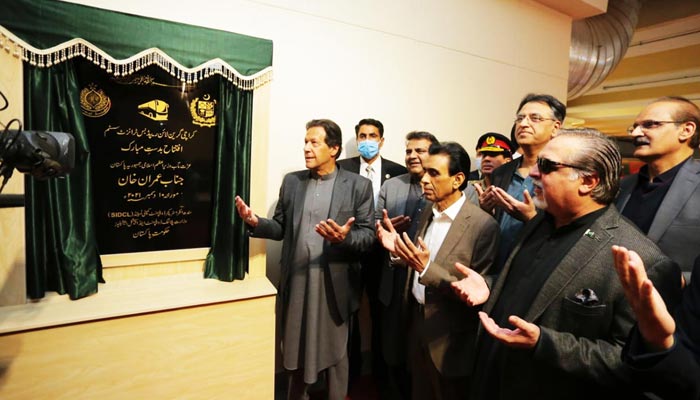 The inauguration was held at the main station of the Green Line project at Numaish Chowrangi. He inaugurated the first phase of the hybrid bus project under the Karachi Transformation Plan.

Speaking during the inauguration ceremony, the premier said that no city can develop without a modern transportation system.

“No modern city can function without a modern transportation system […] and Karachi is Pakistan’s engine of growth. If Karachi is prosperous, then Pakistan will become prosperous too,” he said.

The premier went on to say that there’s a city like this in every country — London runs the United Kingdom, New York has a major impact on the United States, Paris has an impact on France.

The prime minister lamented that several governments came and went, but “no one paid attention” to Karachi’s transportation system.

Citing the example of some of the most developed cities of the world, the premier said that those cities were able to progress because they had modern management.

“Until and unless we focus on the management of Karachi, it cannot turn into a modern city,” he said. “Karachi, according to my estimate, does not even generate $30 million in revenue. It is important to give autonomy to Karachi, just like Tehran, London, and New York,” he said.

The prime minister said there was a need to get the mayor directly elected in Karachi and PTI was about to do it in Peshawar, Islamabad, and Lahore.

While shedding light on environmental issues, he said due to the growing population, Karachi has become a very polluted city, therefore, measures must be taken to address the problem.

“The cleaning of nullahs, the works on the freight corridor are underway, but I am particularly happy about one project — K-4 — in which I am personally involved and take regular updates from WAPDA chairman,” he said.

PM Imran Khan said during the next month, the groundbreaking ceremony of the K-IV Project would be performed, and in the next 14-15 months, it will be completed.

“In 2023, we will be able to provide water to Karachi from Kenjhar Lake in August or September,” the prime minister said.

Advice to Sindh government
The premier said that the PTI-led government had launched health cards, as when a person in a family is sick, and they can’t get that person treated, it becomes a tragedy for them.

In Khyber Pakhtunkhwa, every family has a health card; in Punjab, some districts have it, and in January or March, every family will have it there. “Balochistan, Azad Jammu and Kashmir, and Gilgit-Baltistan are all geared up to roll it out.”

The prime minister told the Sindh government to partake in it and introduce it in the province, so people can benefit from it.

“I would like to urge the Sindh government to cooperate with the Centre in this regard,” he said.

PTI workers stage protest
Meanwhile, prior to the arrival of the premier, the workers of the PTI staged a sit-in protest for not being invited to the launch ceremony. MPA Jamal Siddiqui attempted to appease the angry workers.

Green Line Bus Rapid Transit
The Green Line Bus project was announced by the PML-N’s federal government in July 2014. On February 26, 2016, the foundation stone of the 17.8 km long track from Surjani to Guru Mandir was laid.

The Green Line bus service will comprise 80 hybrid buses that will ply a route of 22 kilometres from Surjani to the Municipal Park near Jama Cloth market with, 23 stations located on each km.

Modern state-of-the-art lifts and automatic ticketing systems will facilitate passengers on every bus station. All details about the arrival and departure of buses will be available on digital screens installed on bus stations.

Each bus will have a capacity of 200 to 250 passengers while the fare is expected to be between Rs20 and Rs50. The buses will have a complete system from USB ports to wheelchairs.

In the second phase of the project, buses will run to the Tower. Under the Green Line Bus project, a two-storey underpass is being constructed at Guru Mandir and Numaish Chowrangi, where not only buses will run on international standards, but accommodation will also be provided.

A control room with at least 900 cameras has also been set up for monitoring of the Green Line bus project and security of passengers to meet the requirements of modern times.

However, he said that the PTI-led government had inaugurated a project after three-and-a-half years, which was supposed to be completed in “three months”.

“Today, the prime minister who had nothing to do with the project, inaugurated it,” he added.

For his part, Sindh government spokesperson Murtaza Wahab said the people who termed the bus service as “jangla bus” are now inaugurating the projects of other governments.

“The announcement-based government should now be called ‘Ailaan Khan’,” he said, as he announced that the provincial government would roll out 50 new buses for the people on January 31.

Meanwhile, Sindh Transport Minister Awais Shah credited former premier Nawaz Sharif for the project, as the works on it had started during his government’s tenure.