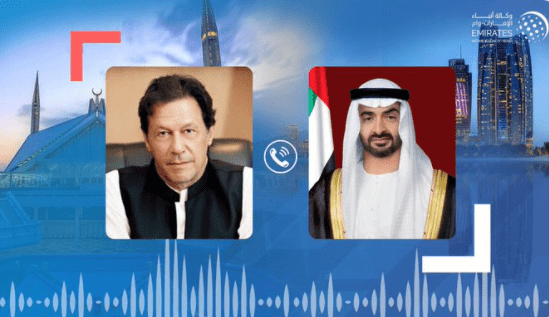 The prime minister affirmed Pakistan’s solidarity with the UAE and rejection of any threat to the security and sovereignty of the Emirates, UAE’s official news agency WAM reported.

He also offered his condolences for the victims of these attacks and wished a speedy recovery for the injured.

For his part, Sheikh Mohamed expressed his thanks and appreciation to Prime Minister Khan for his sincere feelings towards the UAE and its people.

He was received by Pakistan’s ambassador to UAE UAE Afzaal Mahmood.

The UAE foreign minister conveyed condolences on the demise of a Pakistani national in a terror attack in Abu Dhabi on Monday.

He assured the ambassador of every possible support in the repatriation of the dead body of the deceased and treatment of the two Pakistanis injured.

He greatly appreciated the expression of support and solidarity from the government of Pakistan in the wake of heinous terrorist attacks.

He praised Pakistan Expo Team for effectively displaying the potential of its country at Expo 2020.

Warmly welcoming the foreign minister, Ambassador Mahmood conveyed deepest condolences and expressed solidarity from the Government and the people of Pakistan with the leadership and people of the UAE.

He strongly condemned the cowardly attack by the Houthis against civilians.

The ambassador thanked the government of UAE for its sympathy for the family of the Pakistani national who was the victim of the attack and support to the injured.

He also conveyed gratitude to the UAE for extending fullest support to Pakistan Expo Team.

The two expressed determination to further strengthen the fraternal ties existing between the two countries. Pakistan and UAE have supported each other throughout the history of their relationship.

Biden says ‘not time to give up’ on Iran nuclear talks