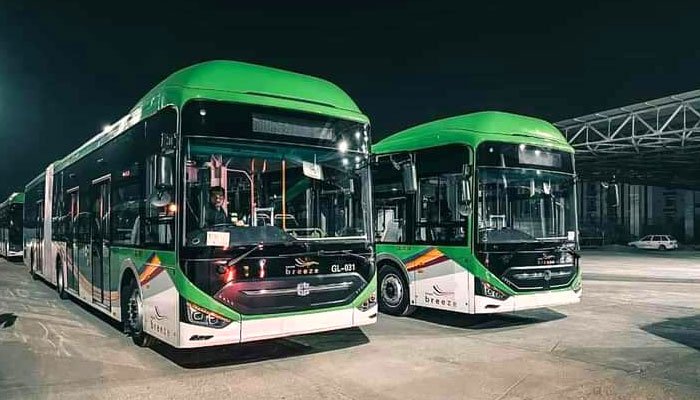 The bus service will comprise 80 hybrid buses that will ply a route of 22 kilometres from Surjani to the Municipal Park near Jama Cloth market with, 23 stations located on each km.

The prime minister will arrive in the megacity Friday afternoon on a one-day visit. He will inaugurate the first phase of the hybrid bus project under the Karachi Transformation Plan.

According to sources, a delegation of businessmen will call on him at the Governor House. The officials of the PTI Sindh region will also call on PM Imran Khan.

PM Khan will leave for Islamabad after the project’s inauguration.

Green Line Bus Rapid Transit
The Green Line Bus project was announced by the PML-N’s federal government in July 2014. On February 26, 2016, the foundation stone of the 17.8 km long track from Surjani to Guru Mandir was laid.

Modern state-of-the-art lifts and automatic ticketing systems will facilitate passengers on every bus station. All details about the arrival and departure of buses will be available on digital screens installed on bus stations.

Each bus will have a capacity of 200 to 250 passengers while the fare is expected to be between Rs20 and Rs50. The buses will have a complete system from USB ports to wheelchairs.

In the second phase of the project, buses will run to the Tower. Under the Green Line Bus project, a two-storey underpass is being constructed at Guru Mandir and Numaish Chowrangi, where not only buses will run on international standards, but accommodation will also be provided.

A control room with at least 900 cameras has also been set up for monitoring of the Green Line bus project and security of passengers to meet the requirements of modern times.