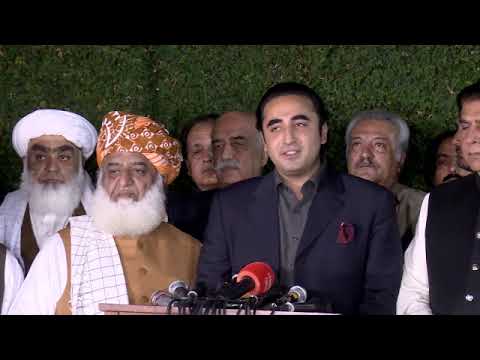 ISLAMABAD: PPP Chairman Bilawal Bhutto-Zardari has met JUI-F chief Maulana Fazlur Rehman and the president of the PDM, in a sign that ties between the PPP and the Opposition alliance may be warming once again.

In April this year, PPP members had resigned from all offices of the PDM in protest after the Opposition alliance had sent show-cause notices to the party’s chairman.

The PDM had sent the show-cause notices to the PPP leaders, asking them to explain why they sought the support of Balochistan Awami Party (BAP) leaders to secure the election of Leader of the Opposition in the Senate Yousaf Raza Gillani.

PPP Chairman Bilawal Bhutto met Fazl at his Islamabad residence, where the two expressed concern over the rising inflation in the country. In the meeting, as per Geo News, the PPP chief told Fazl that he is a senior leader and that ties between the two have existed for over three generations now.

Discusssing the political scenario, Bilawal told the JUI-F chief that the Opposition can thwart the government’s efforts to bulldoze bills on the Electronic Voting Machines (EVMs) and accountability laws if it sticks to a joint strategy.

The recent camaraderie between the PML-N and the PPP leadership taking a joint stance against the ruling party created an amiable atmosphere between the two parties.

According to sources, senior PPP leader Khursheed Shah, who had been released on bail, played an important role in bringing the PDM and his party closer.