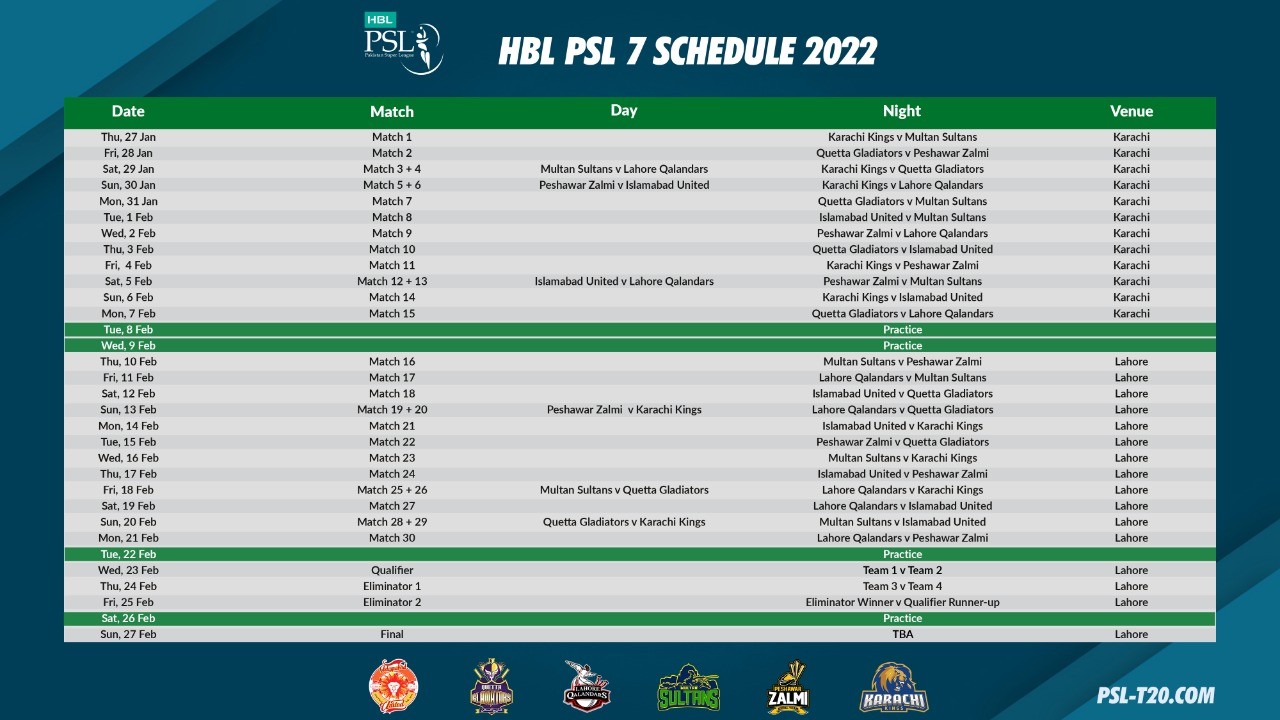 PCB’s marquee event to take place from 27 January to 27 February; Karachi to host 15 matches in first-leg, Lahore to stage remaining 19 matches
Each side to play equal number of matches at the two venues, as well as same number of day and floodlight matches
HBL PSL Draft 2022 to take place on Sunday, 12 December, at 3pm PKT at the High Performance Centre in Lahore
Asif Ali, Haris Rauf and Mohammad Rizwan move to Platinum Category; Haider Ali and Sohaib Maqsood move to Diamond category following local players’ category renewals
Media houses are requested to use correct event nomenclature in texts, headlines and bulletins
Lahore, 4 December 2021:

The countdown of the Pakistan Cricket Board’s marquee event, the HBL Pakistan Super League 2022, began today when the schedule of the seventh edition of one of the most popular and competitive cricket leagues was announced on Saturday.

Following an opening ceremony, defending champions Multan Sultans will take on hosts and 2020 champions Karachi Kings at the National Stadium with the first ball to be bowled at 7pm PKT.

2019 champions Quetta Gladiators will go toe to toe with 2017 winners Peshawar Zalmi on the following day on Friday.

In first of the six double-headers to be played in the 32-day and 34-match tournament, Multan Sultans will take on 2020 runners-up Lahore Qalandars at 2pm PKT, which will be followed by the Karachi Kings and Quetta Gladiators’ fixture that will begin at 7pm PKT on Saturday.

Two-time champions Islamabad will be in action on Sunday afternoon when they will lock horns with Peshawar Zalmi, with the evening match to be played between arch-rivals Karachi Kings and Lahore Qalandars.

After Karachi, which will host 15 matches from 27 January to 7 February, action will shift to the Gaddafi Stadium where the remaining 15 league matches and the four play-offs will be played from 10-27 February.

The 27 February final will be the first time since 2017 when the headquarters of Pakistan cricket will hold the final. National Stadium had staged the finals from 2018 to 2020, while Abu Dhabi was the venue for the 2021 final where Sultans defeated Zalmi by 47 runs.

The PCB has designed the 2022 tournament in such a way that each side will play equal number of matches in Karachi and Lahore, as well as games under natural and artificial lights.

The PCB has decided the HBL PSL Draft 2022 will be held at the High Performance Centre in Lahore on Sunday, 12 December, with the event to kick-off at 3pm.

Each side will come to the draft with a maximum of eight player retentions from the last event. Following the finalisation of player categories, the transfer and retention window is now officially open and will close on 10 December.

The PCB, following a review and assessment process, has updated local players’ categories.

Multan Sultans’ Sohaib Maqsood, who was Player of HBL PSL 6, and Haider Ali of Peshawar Zalmi have moved up from Silver and Gold Categories to Diamond Category, respectively.

“I am delighted that the HBL PSL 7 schedule has been announced. This will now get the ball rolling with the teams to start planning and finalising their line-ups and the PCB increasing the pace of the operational delivery to ensure they provide quality playing facilities for the players as well as five-star experience to the fans and our valued commercial partners.

“The HBL PSL 7 will also kick start what will be a bumper year for Pakistan cricket with the Australia men’s cricket team to play a full series in March-April with England men’s cricket side to tour Pakistan twice for white-ball and red ball cricket.”

Other than Friday’s double-headers – 2pm & 7pm