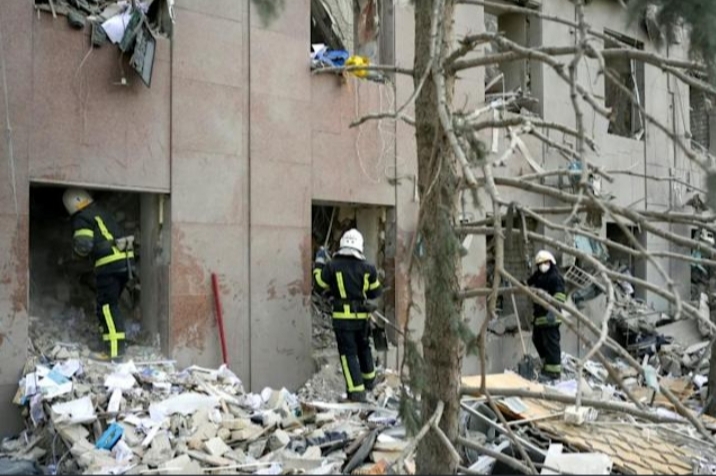 Several days of calm in the southern Ukrainian city of Mykolaiv came to an abrupt end around breakfast-time Tuesday, when a Russian missile tore through a government building, killing seven people.

PMC journalists saw dust-covered rescue workers pull two bodies from the debris: one of a man in uniform and the other of an elderly woman, which they covered in a green sheet.

But military spokesman Dmitriy Pletenchuk said later Tuesday that all those killed had been civilians.

Governor Vitaly Kim confirmed that the regional government office had been targeted.

Ukrainian President Volodymyr Zelensky told Danish lawmakers in a video address: “As far as we know now, seven people were killed, 22 were wounded, and people are still going through the rubble.”

Donald, a retired Canadian postal worker with Ukrainian residency, told AFP he was having breakfast in his flat when the strike hit.

“I heard a whoosh, then a boom and my windows rattled,” the 69-year-old said.

“It’s scary. We have been lucky here in Mykolaiv. We haven’t had that many explosions in the centre of the city,” he added.

The tall administrative building was left with a large section torn away, rows of windows blown out and its base surrounded by large chunks of concrete.

On the eighth floor, a desk and shelves appeared intact on a strip of flooring still attached to what remained of the building, while the rest of the office had collapsed.

By the afternoon, most of the rescue teams had quit the site and mechanical diggers were moving in to clear the rubble.

In the aftermath of the attack, the cloudless spring sky was visible through the massive hole left in the building.

Mykolaiv is a key city on the road to Odessa, Ukraine’s biggest port, and its capture would be significant for Russia.

The port city had seen fierce fighting on its outskirts since Moscow launched its invasion late last month. But in recent days, it had been quiet — until Tuesday morning.

The Russian army had fallen back southeastwards towards Kherson, the only major Ukrainian city over which it claims complete control — and now the focus of a Ukrainian counter-offensive.

Outside a residential complex near the stricken building, people shaken by the blast — some still in nightgowns or pyjamas — gathered in the courtyard to exchange information about the attack and observe the damage.

Yelena Dovgykh, 65, said she had been making breakfast when she heard the strike.

“I went down just as I was,” she said, wearing slippers.

“I took my papers and my dog,” she told AFP, carrying her pet and a plastic bag with documents under her arm.

Svetlana Fedorenko cut her hand picking up broken glass from her balcony and living room kitchen. But she has known worse, the resident insisted.

Viktor Gaivonenko, a neighbour who came to help her clean up the debris, railed against Russian President Vladimir Putin.

“Putin is a bastard. That’s all there is to it,” he said.

Fedorenko said she thought he was targeting the regional governor and Zelensky because “they boost the morale of the people and our soldiers”.

“He wants to get revenge for the resistance Mykolaiv is putting up that’s blocking him from reaching Odessa,” she added.

Kim, the governor, appeared to agree.

Russian forces “realised they couldn’t take Mykolaiv and decided to say hello to me, to say hello to all of us,” he wrote after the strike, adding that his own office had been destroyed.

Just a day earlier, residents marked the 78th anniversary of the liberation of Mykolaiv from the Nazis by Soviet Red Army troops towards the end of World War II.

On Mykolaiv’s central avenue, a monument on which sits a Soviet T-34/85 tank commemorates those soldiers, with fresh flowers at its base.

“We drove out the Nazis in 1944,” Ukraine’s defence ministry said this week to mark the occasion.

“We will not give the Russian fascists a chance in 2022.”

Bridgerton season 2 review: So different they might as well have renamed the entire show