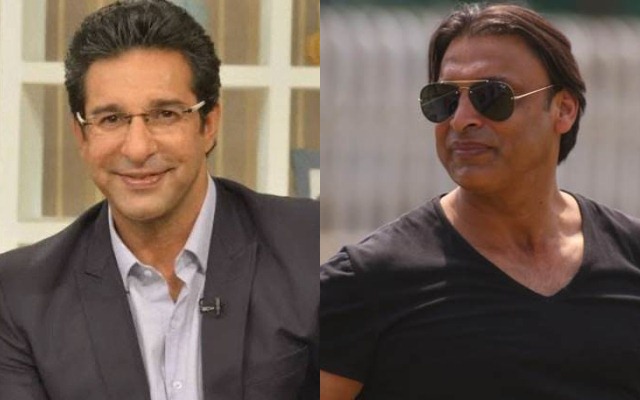 Shoaib Akhtar has lashed out at former Pakistan captain Wasim Akram, saying that he has spent his entire life clubbing.

A war of words between the cricketers has erupted with the Rawalpindi Express lashing out at his ex-captain, saying that he had learned all his habits from his seniors.

Shoaib Akhtar then lashed out at Wasim Akram, saying that he had spent his entire life at clubs.

“I used to get injections for my knee problem so couldn’t do that often. But if I went to the club once in a blue moon, what’s the big deal?” he asked. “If my seniors were disciplined, so would I,” he said.

Wasim Akram, in an interview with ARY News, responded to Akhtar’s criticism, saying that he doesn’t understand why people take Shoaib Akhtar seriously.

“”I don’t know why people take what Shoaib Akhtar says so seriously. If a person has no tameez he knows nothing about life,” responded Wasim Akram.

The two fast bowlers used to bowl for Pakistan and have shared many a great memories together. However, it remains to be seen whether there will be more hostility between the two in the days and months to come or not.

Wasim Akram, on the one hand, has praised the Pakistan management’s team selection for the ICC Cricket World Cup 2021 while Shoaib Akhtar has criticised it.

Wasim has said, in an interview with ARY News, that the current team players all have a role to play in the coming world cup.

Ali Gul Pir lashes out at Ali Zafar, says ‘I am not apologising’

Shoaib Akhtar is all praise for new pace sensation Dahani