Pakistani singer Abdullah Qureshi took to Instagram to apologize to his fans for allegedly misbehaving with teenage girls on social media. Abdullah Qureshi was responding to allegations made by a woman that he had sexually harassed her and sent minors inappropriate messages.

Abdullah Qureshi did not shy away from admitting his mistake, saying that he took responsibility for his actions and that like everyone else, he also had some fetishes. However, the singer said he had given his habits up after he had his daughter, and is a changed man.

“I apologize to everyone for all this. I won’t blame my drunken state because it was me at the end of the day. But yes, I did have a drinking problem and I do have fetishes. But everyone has fetishes,” he said.

He went on to clarify that his apology “is not about that [his fetishes],” but about “messaging randoms.” He further stated, “Yes, I did have that problem too, but I stopped when I had my daughter. I apologize to her for being the worst dad.” 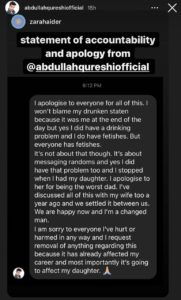 He also mentioned that he had settled all this with his wife a year ago, and now is living a normal life.

The singer was slammed for messaging random girls from his account, sending unnecessary messages, and constantly messaging them to talk to him in an uncomfortable manner. Some unknown girls also accused him of sending inappropriate pictures on social media platforms.

This issue was highlighted following Noor Mukaddam’s murder which happened recently in Islamabad, after which many women who had faced harassment, threats, or have been bullied took the opportunity to highlight men responsible for doing so to make others aware.