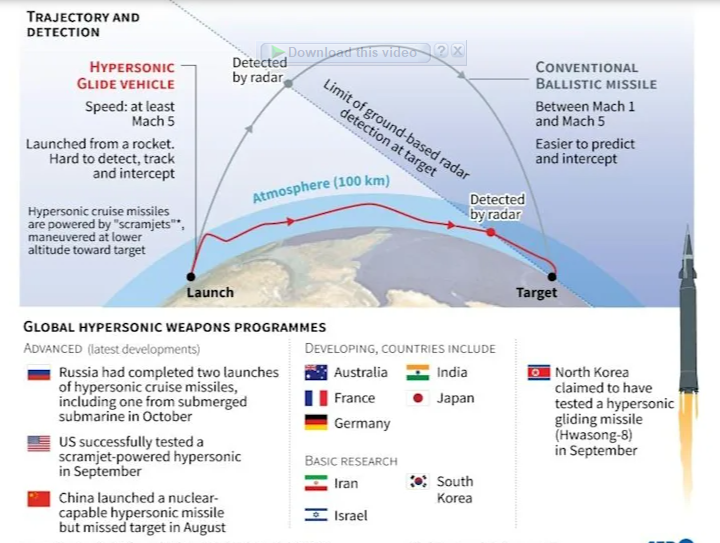 The United States successfully tested hypersonic missile technology, a new weapons system which is already being deployed by China and Russia, the US Navy said Thursday.

The test, conducted Wednesday at a NASA facility in Wallops, Virginia, is a “vital step in the development of a Navy-designed common hypersonic missile,” the navy said in a statement.

But they are more maneuverable than their ballistic counterparts and can trace a low trajectory in the atmosphere, making them harder to defend against.

Ambassador Robert Wood, US permanent representative to the Conference on Disarmament, expressed concern earlier this week following reports that China had conducted a test in August of a hypersonic missile with nuclear capacity.

According to the Financial Times, China launched a hypersonic missile that completed a circuit of the planet before landing, missing its target.

“We are very concerned by what China has been doing on the hypersonic front,” said Wood, who next week steps down from his post in Geneva after seven years.

China insisted that the test was a routine one for a spacecraft rather than a missile.

Wood said Russia also had hypersonic technology and while the United States had held back from developing a military capacity in this field, it now had no choice but to respond in kind.

“If you’re a country that’s the target of that, you’re going to want to figure out a way to defend yourself from that,” he said.

“And so we start looking at what other applications and defensive applications can you bring to hypersonic technology — and so that continues to things to accelerate the arms race.”

China unveiled a hypersonic medium-range missile, the DF-17, in 2019, which can travel around 2,000 kilometers (1,200 miles) and can carry nuclear warheads.

The missile mentioned in the FT story is a different one, with a longer range. It can be launched into orbit before coming back into the atmosphere to hit its target.

Russia recently launched a hypersonic missile, the Zircon, from a submarine, and since late 2019 has had the hypersonic nuclear-capable Avangard missiles in service. The Avangard can travel at up to Mach 27, changing course and altitude.

The Pentagon hopes to deploy its first hypersonic weapons by 2025 and has said their development is one of its “highest priorities.”

US probe to touch down on asteroid Bennu on October 20