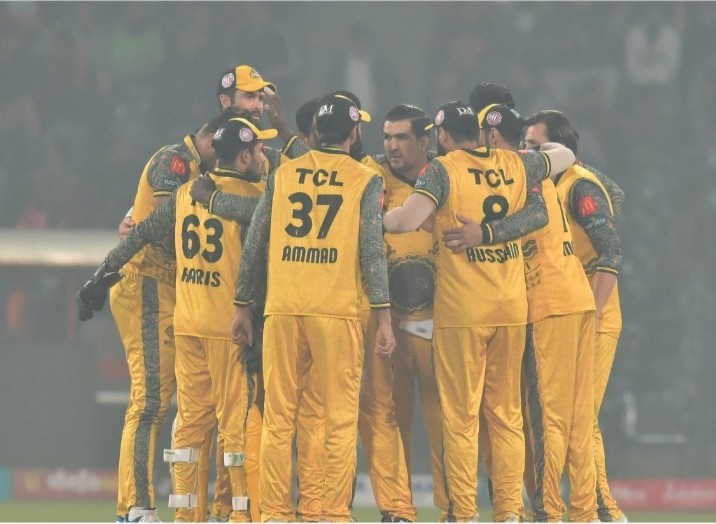 Peshawar Zalmi continued their brilliant turnaround in the HBL Pakistan Super League 7 as they secured a thrilling 10-run win (third consecutive victory) over Islamabad United in the 24th match of the tournament played at the Gaddafi Stadium, Lahore on Thursday night. Player of the match Mohammad Haris produced a dazzling innings of 70 to set-up his side’s win. Zalmi then overcame Azam Khan’s heroic 85 off 45 balls (six fours, seven sixes) to ensure they defend their 206-run total.

Zalmi who elected to bat first could not have hoped for a better beginning as the wicketkeeper-batter Haris did his growing reputation no harm by setting alight the GSL with a series of scintillating strokes in only his third appearance in his HBL PSL career. The right-hander took a mere 18 balls to post his maiden HBL PSL 50 – joint third fastest in tournament’s history.

Haris and Hazratullah Zazai (13) added 73 for the first-wicket inside the power play overs. Haris scored 70 off 32 balls (seven fours, five sixes) before his dismissal to Waqas Maqsood.

After Haris’ loss, Zalmi’s emerging pick Yasir Khan and the seasoned Shoaib Malik mounted further pressure on the United bowlers with 35 and 38 runs contributions off 24 and 23 balls respectively both hit two sixes each. United though managed to bring some semblance of respectability to their bowling effort as Zalmi were held back in the death overs. Faheem Ashraf took three and Waqas Maqsood took two wickets.

Zalmi have meanwhile climbed to the third spot with 10 points from nine games and have one-foot in the play-offs. United have dropped to the fourth spot but remain in the hunt of securing one of the three available play-off spots.

Sultans are the only teams to have qualified for the play-offs, Lahore Qalandars are on number two with 10 points while Quetta Gladiators are fifth with six points. Kings have already been knocked out of the play-off run, they remain winless with eight defeats in eight games.

United came out all guns blazing in their 207-run chase. Opener Rahmanullah Gurbaz gave United the perfect start with a whirlwind 46 off 19 (three fours, five sixes). Rahmanullah added 54 with Mubasir Khan for the first-wicket before falling to Salman Irshad. The right-hander was caught by Liam Livingstone who had earlier dropped him on 14.

United’s chase was then revived by an astonishing assault by Azam who singlehandedly kept his side in the hunt with a series of breath taking shots, using his power and muscle, Azam regularly tonked big sixes to keep United’s chase on track.

With United needing 25 off the last 12, Wahab dismissed Azam and then proceeded to bowl a splendid over conceding a mere three runs.

Ben Cutting ensured United don’t get over the line in the final over of the innings, the 2016 and 2018 champions finished their 20 overs at 196 for seven. Salman with three for 29 in four overs was the pick of the Zalmi bowlers, Wahab took two for 26.

Player of the match Mohammad Haris:
“I have been given the freedom to utilise the power play and I am happy I am contributing. At times I premeditate, I check the field and then try and workout what bowler will bowl next. Players from Peshawar have a strong belief, they work hard and play brave cricket which earns them big rewards.”